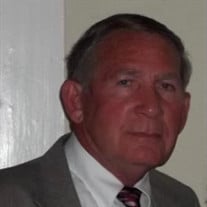 William Wilson Woodard, Jr. of Mountain Home, Arkansas, passed away April 19, 2021, in Mountain Home, Arkansas at the age of 77. He was born September 18, 1943, in Ferguson, Missouri, the son of William and Anna Woodard. William was a U.S. Navy veteran and was a mechanic for Anhauser-Busch in St. Louis, Missouri. He married Eloise in Salem, Arkansas on Valentine's Day. William lived in Mountain Home since moving from St. Louis, Missouri. He was a member of the Twin Lakes Gun Club. He enjoyed fishing and restoring antique cars. William is survived by his wife, Eloise Woodard, of Mountain Home, AR; son, Gregory (Wendy) Woodard; grandsons, Derek and Cody Woodard, and Dawson Schell; five brothers, Thomas, Michael, Neal, Wayne, and Carl; and two step-sons, Scott and Denny Tryon. He was preceded in death by his parents and daughter, Kristine. Arrangements are by Kirby and Family Funeral and Cremation Services - Mountain Home, Arkansas.

The family of William Wilson Woodard, Jr. created this Life Tributes page to make it easy to share your memories.