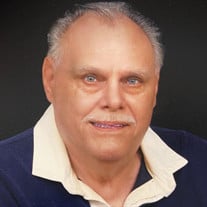 William (Bill) A. Gould of Mountain Home, Arkansas, passed away peacefully at the age of 84 on June 10, 2021, at the Hospice of the Ozarks. Bill was born on May 14, 1937, to the late Ethel (Conley) and Allen Gould in Marinette, Wisconsin. He graduated from Crivitz High School in 1955 and served four years in the United States Air Force. After working on a surveying crew for his beloved uncle, Franklin Gould, he moved to Green Bay upon his employment at Fort Howard Paper Company in 1962. Bill worked at the Fort until 1997 when he retired. In 1960, Bill met Bette Wood when she worked for her father at High Falls Resort. Bill loved to tell the story of how he saw a beautiful, vibrant woman and knew he had to meet her. Not only did he meet her, on October 14, 1961, they were married at Faith Presbyterian Church, in Crivitz, Wisconsin. They celebrated 59 years of marriage last fall. Bill and Bette raised two daughters in Green Bay. Bill and Bette moved to Mountain Home in 2000 and enjoyed life in the home they built overlooking Lake Norfork. From an early age Bill loved the outdoors, and he was a lifelong avid hunter and fisherman. Bill loved clearing brush on properties he owned in northern Wisconsin and the Upper Peninsula of Michigan. Bill is survived by his wife, Bette (Wood) Gould; daughter, Jeanine (Greg) Kostka, and grandchildren, Stephen and Andrew Kostka; daughter, Nancy (Willard) Ratliff, and grandchildren Christopher and Megan Ratliff; sister-in-law Barbara Lusader; brother-in-law Jack Belongia; cousins, nieces, nephews and lifelong friends; and the circle of Mountain Home friends who provided care and comfort during his final years, especially Susan, Carla, Lucinda, Vicki, Teresa, Colleen, Bill, Carolyn, Kathy and Laurie. Bill was preceded in death by his parents, Ethel and Allen Gould, and his sister, Patricia (Gould) Belongia. The family requests that expressions of sympathy be made in his name to one of the following organizations: The Foundation for Barnes-Jewish Hospital (www.foundationbarnesjewish.org); Baxter Regional Hospital Foundation (www.baxterregional.org/foundation); or Hospice of the Ozarks (www.hospiceoftheozarks.org/ways-to-give). A Celebration of Life for William will be 10:00 am, Thursday, July 8, 2021, at Kirby & Family Funeral Home Chapel, with Reverend Randy Ludwig, and Reverend Daniel Theuson officiating. Military Honors will be provided by the United States Air Force and the Alley-White American Legion Post #52 Honor Guards. Arrangements are by Kirby and Family Funeral and Cremation Services - Mountain Home, Arkansas.

William (Bill) A. Gould of Mountain Home, Arkansas, passed away peacefully at the age of 84 on June 10, 2021, at the Hospice of the Ozarks. Bill was born on May 14, 1937, to the late Ethel (Conley) and Allen Gould in Marinette, Wisconsin. He... View Obituary & Service Information

The family of William A. Gould created this Life Tributes page to make it easy to share your memories.

William (Bill) A. Gould of Mountain Home, Arkansas, passed away...

Send flowers to the Gould family.