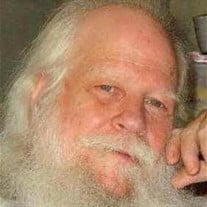 Bill Hendricks made his transition home on February 23, 2022 at Baptist Hospital in Little Rock, after a sudden and brief illness. He is described by his loved ones as someone who is extremely talented, intelligent, and generous, having taught Art and Music to many, pouring into the lives of his students and friends. Bill was a teacher at Camden-Fairview Schools starting in 1992, and retiring in 2005. He was an avid learner, and spent his free time studying math, physics and astronomy. Bill also continued his passion for art and music after he retired, composing an array of original works at his home on White Oak Lake. These can be enjoyed today by visiting https://soundcloud.com/william-bernard-hendricks/ His works of art are distributed throughout Arkansas and the country. Many of his students carried home portraits to share with their families. Bill attended Camden High School from 1957-1961, and graduated from Fairview Highschool in 1962. He studied Art Eductation at SAU in Magnolia, and finished his teaching certificate in 1992. Bill served active duty in the Navy in the early 1960's. One of his favorite stories to tell was how he helped save the world aboard the USS Charles P. Cecil in October of 1962, when he was on watch and spotted a Soviet submarine which was then forced to surface and subsequently escorted away from the quarantine line. His was the first Destroyer on site during the Cuban Missile Crisis. Bill is preceded in death by his parents, James William "Jim" and Mary Ellen Hendricks, business owners from Camden, Arkansas, his wife, 'Sister Rebecca Hendricks,' and his siblings, Mildred M. Phillips Silliman (Mimi), Mary Ellen Bates Hendricks (Sis), Dorothy Walker (Dot), and Jack Hendricks. He is survived by his siblings, Sandy Hendricks Holman, and Kay Hendricks Hopkins, his sons Eric, Ivan, Jon Luke, and James Hendricks, and his grandchildren, Sunni and Aiden Hendricks, Emma Hendricks Bass, Sarah Hendricks, and Aubrey Hendricks, Hunter Burtness, Gavin Hendricks, and Abigail Hendricks, and his daughters-in-law, Margie Hendricks and Wanda Hendricks. His body was laid to rest Sunday, February 27th, at Kirby Tucker Cemetery in Mountain Home, AR. The family requests that memorials made in Bills honor (in lieu of flowers) be made to Camden-Fairview public schools or Families Against Distracted Driving (FADD) PO Box 406, Mountain Home, AR 72654. Arrangements are by Kirby & Family Funeral and Cremation Services - Mountain Home.

Bill Hendricks made his transition home on February 23, 2022 at Baptist Hospital in Little Rock, after a sudden and brief illness. He is described by his loved ones as someone who is extremely talented, intelligent, and generous, having taught... View Obituary & Service Information

The family of William "Bill" Bernard Hendricks created this Life Tributes page to make it easy to share your memories.

Send flowers to the Hendricks family.