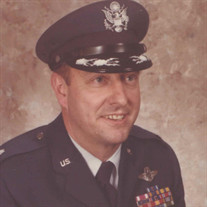 Lt. Col. Thomas James Wham, USAF Ret., of Mountain Home, Arkansas, passed away July 10, 2021 at the age of 85. He was born April 10, 1936 in Sacramento, California, the son of Sarah Ann Morrison Wham and Raymond L. Wham. Tom married Mary Sue Hartzell on January 7, 1961 in San Rafael, California. He was a graduate of the University of Maryland and served in the United States Air Force. During his 20 years of service, Tom proudly protected this country around the world as an Electronics Warfare Officer with particular focus in the RB-47H “Spy Plane”, B-52’s and intelligence briefings for the SR-71 “Blackbird”. Retiring in 1979, he moved his family to Mountain Home. Tom loved genealogy, raising cattle, improving his farm on Bull Shoals Lake, and hand crafting his cabin. Tom is survived by his wife of 60 years, Mary Sue Wham of Mountain Home, Arkansas; sister, Kathryn Atkinson of Gainesville, Missouri; sons, Robert H. Wham (Cecilia Ruffing) of Boulder, Colorado, and Thomas B. Wham (Tracy McCreery) of St. Louis, Missouri; daughter-in-law, Kathy L. Wham of Mountain Home, Arkansas; and grandchildren, Gabriel, Victoria, and Olivia. He was preceded in death by his parents and son, John E. Wham of Mountain Home, Arkansas. Services will be private. Memorials may be made to a charity of your choice. Arrangements are by Kirby and Family Funeral and Cremation Services - Mountain Home, Arkansas.

The family of Thomas James Wham created this Life Tributes page to make it easy to share your memories.

Send flowers to the Wham family.