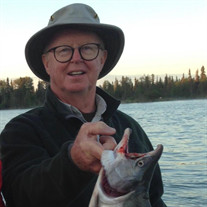 Steve N. Wilson was born April 28, 1944, in Batesville, Arkansas, to Henry Gray Wilson and Leone Searcy Wilson. He passed away in Albuquerque, New Mexico, on February 21, 2021, due to complications from Chronic Lymphocytic Leukemia and Histoplasmosis.... View Obituary & Service Information

The family of Steve N. Wilson created this Life Tributes page to make it easy to share your memories.

Send flowers to the Wilson family.