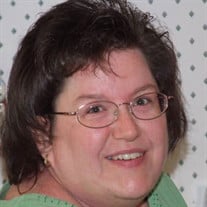 Ronda Mutz Kerns of Mountain Home, Arkansas, went to her eternal home on July 10, 2021, in St. Louis, Missouri, at the age of 56. She was born January 31, 1965, in New Orleans, Louisiana, and was the daughter of George and Ceil Mutz. She married Ronald Kerns on November 16, 1996, in Mountain Home, Arkansas. Ronda is survived by her husband, Ronald, of Mountain Home, their three daughters, Erin, Emilie, and Elise Kerns, and her father, George Mutz of Lakeview, Arkansas. She was preceded in death by her mother, Ceil Mutz and two infant brothers. Ronda loved music, mainly hymns and Christian music. She sang in her church’s youth choir, and was a member of her high school’s band. She enjoyed studying the scriptures and sharing her faith in Jesus Christ with friends and strangers. She was a participant in two mission trips, one to Singapore and the other to Jamaica. Ronda worked as a travel agent while living in New Orleans. In Mountain Home, and in Dallas, she worked in the radiology department of two hospitals. She was a stay-at-home mom for many years, and a substitute teacher at the school her daughters attended. She also enjoyed cooking, which she learned from her momma. Both were excellent cooks. From the time Ronda was a little girl, she had never met a stranger. She was always outgoing and was always interested in the well-being of others. She was a living example of her faith in Jesus Christ. A celebration of her life will take place at 11:00 am, July 31, 2021 at First Baptist Church Bull Shoals, Arkansas. Pastors Jerry Backus and Jon Norvell officiating. In lieu of flowers, a Memorial Fund has been made for her daughters. Those wishing to contribute can send their memorial to: Memorial Fund for Ronda Kerns c/o Farmers & Merchants Bank 2696 Highway 62 East PO Box 1928 Mountain Home, AR 72654 Arrangements are by Kirby and Family Funeral and Cremation Services - Mountain Home, Arkansas.

Ronda Mutz Kerns of Mountain Home, Arkansas, went to her eternal home on July 10, 2021, in St. Louis, Missouri, at the age of 56. She was born January 31, 1965, in New Orleans, Louisiana, and was the daughter of George and Ceil Mutz. She married... View Obituary & Service Information

The family of Ronda Kerns created this Life Tributes page to make it easy to share your memories.

Send flowers to the Kerns family.