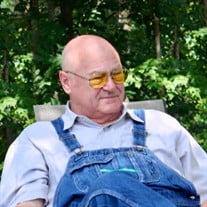 Ronald C. Newton of Bruno, Arkansas, passed away February 24, 2022, at the age of 75. He was born October 12, 1946, in Girard, Kansas, the son of Charles and Mary McCarter Newton. He married Shirley McFarland on July 10, 1964, in Rogers, AR and worked as an Engineer in the Telephone Industry. Ron lived in Bruno since moving from Kimberling City, MO, in 2002. Ron is survived by his wife, Shirley Newton of Bruno, AR; daughters, Kelly (David) Ezell of Bruno, AR, and Robyn (Dennis) Rantz of Reeds Spring, MO; brother, Kenny (Lisa) Newton; sister, Cathy (Larry) Moon; grandchildren, Curtis (Brittany) Ezell, Chesera (Justin) Wheeler, Emily (Devon) Chase, and Elizabeth (Brice) Lacy; great-grandchildren Blane, Briar, Dakota, Harper, Blakely, and Sophie, Ron grew up in Bakersfield, Missouri where he helped on the family farm milking cows and raising sheep. He graduated high school early and went one semester to the University of Central Arkansas in Conway. He moved to Rogers, Arkansas and worked for a time at a tool and dye company. While in Rogers he married Shirley. Ron worked over the years running a dozer, driving a Semi-truck and Telephone Engineering. In 1986 Ron fulfilled a lifelong dream of learning to fly. He received his private pilots license and owned several planes over the years. He enjoyed planning trips with Shirley, with good food as part of the destination. In 2002 Ron and Shirley purchased the farm in Bruno and started raising Hereford cattle. Ron always said he wanted to sit on his porch and look out over his beautiful white-faced cows. Ron enjoyed the grand and great grand kids and looked forward to the next family get together. He was a great storyteller and always had numerous stories to share. He was preceded in death by his parents and great-grandchildren Jacob and Adaline Wheeler. Visitation will be Thursday, March 3, 2022, 12:00 pm - 1:00 pm, at the Caney Church of Christ. Funeral Service for Ron will be 1:00 pm, Thursday, March 3, 2022, the Caney Church of Christ, with Jeff Crawford officiating. Burial will be in the Caney Cemetery, Yellville, AR, with David Ezell, Dennis Rantz, Curtis Ezell, Justin Wheeler, Brice Lacy and Devon Chase as pallbearers.

The family of Ronald C. Newton created this Life Tributes page to make it easy to share your memories.

Send flowers to the Newton family.