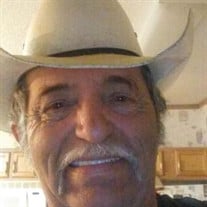 Ronald Eugene Klinger, of Flippin, Arkansas, born January 17, 1953 in Callender, Iowa, to Donald and Lydia Hurtt Klinger, passed away January 6, 2022 at Baxter Regional Medical Center in Mountain Home, Arkansas. Ron was an avid fisherman, including his love for fly fishing on the White River and a hunter. He loved the outdoors and tinkering on anything he could get his hands on. He had a passion for mechanics and rebuilding cars and motorcycles. Ron was a jack of all trades. He was an amazing upholsterer. Ron will be remembered for his sense of humor and his loyalty to his friends. Ron is survived by his two sisters, Linda Fawcett of Lakeview, AR, and Kristy (Larry) Janeway; his children, Rebecca Klinger of Flippin, AR, Bobby (Holly) Klinger of Fort Dodge, IA, Brenda (Alan) Klinger of Flippin, AR, Ashley (Stephan) Eslick of Fort Dodge, IA, Casie (Randy) Harris of Wilmington, NC, Brady (Sami) Klinger of Mountain Home, AR, Sonia Gross of Fort Dodge, IA; and his dogs, Butch and Buddy. Ron was blessed with 20 Grandchildren, Bobby Jr., Angelina, Jason, Tylar, Jackson, Keagon, Jordan, Terrill, Payten, Athena, Matthew, Madisan, LaShay, LaTyhia, Preston, Jeremiah, Aryah, Iris, Ryanna, and Kye, and 11 great-grandchildren. He was preceded in death by his parents; his brothers, Robert, Richard, and Randy; and his sisters, Carol and Donna. A memorial service for Ron will be 10:00 am, Tuesday, January 11, 2022, at Kirby & Family Funeral Home Chapel, with Craig Fawcett ministering. Due to current restrictions, masks are required. Arrangements are by Kirby and Family Funeral and Cremation Services - Mountain Home, Arkansas.

The family of Ronald Eugene Klinger created this Life Tributes page to make it easy to share your memories.

Send flowers to the Klinger family.