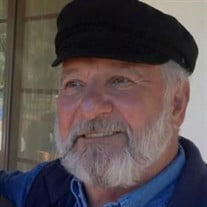 Ronald Charles Jacobs of Lakeview, Arkansas, passed away July 8, 2021, in Mountain Home, Arkansas at the age of 79. He was born August 3, 1941, in Detroit, Michigan, the son of Peter and Adele Smith Jacobs. He married Connie Dobbin Walker on October 26, 1990, in Anchorage Alaska. He attended the University of Alaska, Anchorage and the Charles County Community College in Maryland. Ron retired from the U.S. Air Force after serving 20 years. He was an Explosive Ordinance Disposal (EOD) Technician and a Nuclear Weapons Specialist. He was awarded an Air Force Presidential Unit Citation; Meritorious Service Medal, and Air Force Commendation Medal. Ron was assigned to multiple Air Force Bases throughout the world and in the U.S. He served proudly in Vietnam and was very patriotic. Ron was a lifetime member of the Bull Shoals VFW Hoevel-Barnett Post 1341, a member of the Bull Shoals American Legion Post 431, a member of NRA, a lifetime member of the Alaska Airmen's Association, and member of the Elmendorf Aero Club. Ron lived 45 years in Alaska and was an Alaska Bush Pilot enjoying flying his plane for many years and being Captain of his boat the “Connie Sue” boating and fishing in Prince William Sound, Whittier, Alaska. He was an active member of the U.S. Coast Guard Auxiliary in the Whittier Alaska Flotilla and was a Flotilla Staff Officer as a boating safety and boat inspector. He was a founding member of the Department of Homeland Security through the United States Coast Guard. Ron had many careers following his Air Force retirement. He worked in insurance, then as an Alaska State Trooper. His final career was with the Municipality of Anchorage in the Department of Risk Management at Anchorage City Hall. He retired from the Municipality of Anchorage, Department of Anchorage Water and Wastewater Utility as a Safety and Security Officer and was a Certified Utility Safety Administrator. Ronald is survived by his wife of 30 years, Connie Jacobs of Lakeview, AR; daughters, Connie (Richard) Mehner of AZ and Paget Plunk of AK; step-daughter, Gina Walker of AZ; sister, Sandy (Norman) Maeder of MI; grandchildren, Austin, Gavin, Taryn, Rick; and great-granddaughter, Quinn. He was preceded in death by his parents. A Celebration of Life will be held at 11 AM, July 27, 2021 at the Kirby & Family Funeral Home in Bull Shoals with Heather Marsalis officiating. Military Honors will be provided by the United States Air Force Honor Guard, the VFW Hoevel-Barnett Post 1341, and the VFW Hoevel-Barnett Post 1341 Auxiliary. Due to current restrictions, masks are required. Memorial donations may be made to Bull Shoals VFW Hoevel-Barnett Post 1341 or the Bull Shoals American Legion Post 431. Arrangements are by Kirby and Family Funeral and Cremation Services - Bull Shoals, Arkansas. Visit an online obituary and guestbook at www.kirbyandfamily.com .

Ronald Charles Jacobs of Lakeview, Arkansas, passed away July 8, 2021, in Mountain Home, Arkansas at the age of 79. He was born August 3, 1941, in Detroit, Michigan, the son of Peter and Adele Smith Jacobs. He married Connie Dobbin Walker on... View Obituary & Service Information

The family of Ronald Charles Jacobs created this Life Tributes page to make it easy to share your memories.

Send flowers to the Jacobs family.