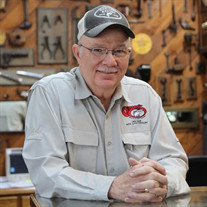 Ronald L Branaman, 68, passed away peacefully on February 16, 2021. Born in Peoria, Illinois, Ron shared his birth on February 12, 1953 to parents John and Doris Branaman (now Houser) with his twin brother, Ran. They grew up with their older brother Rick in both Illinois and North Arkansas, the three learning together everything they could about the great outdoors. He married, “the best thing that ever happened to him,” Gabriele Topping on December 8th, 1978. The two raised their three children an airstrip away from the White River, but he was always a lake guy at heart. Combining a serious love of fishing and working with people, Ron spent his career as the General Manager of Gaston’s Resort. People admired his inner calm and remembered him for being as much of an attraction at Gaston’s as the White River itself. Decade after decade, repeat guests were greeted by Ron, a Burt Reynolds look alike, who welcomed them by name and always donned a moustache and the same Gaston’s cap. Ron was an avid lover of baseball, a “Cubbies” fan specifically, a backyard wildlife enthusiast delighting most when wild turkey and deer crossed the yard, and true to his upbringing, he grew into a skilled outdoorsman and excellent cook on the grill. He spent his mornings filling bird feeders with sunflower seeds and loved to kick back and relax with a good highball in the evening. In his last years of too-short retirement, Ron spent his time lake fishing, dove and deer hunting, spoiling his grandson, Lucian, and hanging out with his family in their home that overlooks Bull Shoals Lake. Ronald is survived by his wife, Gabriele Branaman of Flippin, AR; mother, Doris Houser of Flippin, AR; mother-in-law, Rita Dykes of Bull Shoals, AR; sons, Ryan (Lea Hawkins) Branaman of Bull Shoals, AR and Dusty (Mimi Johnson) Branaman of Conway, AR; daughter, Tatum (Remi Predal) Branaman of Houston, TX;  grandson, Lucian Raine Branaman of Bull Shoals, AR; brothers, Rick (Carla) Branaman of Washington, IL and his twin - the man whose presence keeps Ron present for us all - Ran (Charlene McBee) Branaman of Flippin, AR; and countless other family members and close friends. He was preceded in death by his father, John, and best friend, G.E. Estes. A Celebration of Life for Ronald will be at 3:00 pm, Tuesday February 23rd 2021, at the Presbyterian Church of Bull Shoals, with Heather Marsalis, Celebrant officiating. A visitation will be from 1pm until time of service. Due to current restrictions, masks and physical distancing are required. Following is the link to the livestream- https://boxcast.tv/view/ronald-branaman---celebration-of-life-133287. Memorials may be made to the Crooked Creek Conservation District for their Outdoor Classroom Project. Arrangements are by Kirby and Family Funeral and Cremation Services - Bull Shoals, Arkansas.

Ronald L Branaman, 68, passed away peacefully on February 16, 2021. Born in Peoria, Illinois, Ron shared his birth on February 12, 1953 to parents John and Doris Branaman (now Houser) with his twin brother, Ran. They grew up with their older... View Obituary & Service Information

The family of Ronald Branaman created this Life Tributes page to make it easy to share your memories.

Send flowers to the Branaman family.