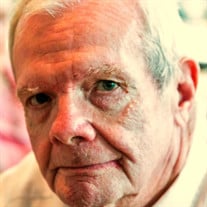 Rock Jenkins Engeler, 85, of Mountain Home, Arkansas, passed away February 23, 2022. He was born February 1, 1937, in Indianapolis, Indiana, the son of Gordon F. “Squire” and Elisabeth M. “Sis” Jenkins Engeler. Growing up on a farm in the middle of two brothers and three sisters, Rock learned to drive tractors early and would take his siblings for rides on tractor-pulled sleighs. In 1957, when the Engelers sold their farm and moved to Mountain Home, he came to Arkansas with the family. Somehow persuading her to join him on a second date after a legendarily disastrous first one, Rock eventually married Nellie Faye Wallace on August 25, 1962, at St. Andrew's Episcopal Church in Mountain Home. The arrival of the entire Engeler family doubled the size of the congregation of St. Andrew’s and prompted the building of a new church across from Mountain Home Cemetery. Rock served on the vestry, led the acolytes, and, with Nell, guided the Episcopal Youth Community (EYC) on service trips and discipleship. Rock also supported Nell in her work with Girl Scouts, and between the Girl Scouts and EYC took hundreds of young adventurers on outings for camping, boating, canoeing, and water and snow skiing. Rock and Nell were influential in establishing Mountain Home as a growing and progressive community, working on the City Council to develop recreation programs and the Mountain Home Swim Team, The Manta Rays. Rock was a member of the Benevolent Protective Order of Elks and worked to fund and organize the Volunteer Fire Department and Rescue Unit, where he served with his fellow volunteer firefighters for 22 years. An entrepreneur as well as a public servant, Rock began a Gulf Oil distributorship right off the town square in downtown Mountain Home. As a driver, Rock was unparalleled; large or small, truck or trailer, tractor or boat, he could maneuver in close quarters with finesse and ease. He was equally at ease with music and singing. With a gift for harmony and an ear for a tune, Rock could play any song on guitar, banjo, ukulele, or piano. Rock’s bass voice and perfect pitch guided harmonies whether in a barbershop quartet or a church congregation. In retirement, Rock remained active at St. Andrew’s and in the Lion’s Club. He was a fanatical follower of the St. Louis Cardinals. Although he shared his abiding love of Sesame Street and The Muppet Show with three generations of Engeler children, his passion for the Weather Channel and all weather presenters everywhere was uniquely his own. Rock is survived by his wife, Nellie Faye Wallace Engeler of Mountain Home, AR; son, Robert Jess (Sarah) Engeler-Young of Conway, AR; daughters, Kimberly Engeler (Steve) Wood of College Park, MD; and Ellen Jane (Fred) Rainey of Springdale, AR; brother, William James Engeler; sister, Ann Amerson Engeler; grandchildren Julius (Nicole) Seymour Rainey, Benjamin James Rainey, Emily Rose Rainey, Samuel Carl Rainey, Zelda Mars Engeler-Young, and Charles Wallace Wood; and great-granddaughter, Piper Joy Rainey. He was preceded in death by his parents; brother, Gordon Frederick Engeler Jr.; and sisters, Jane Elisabeth "Buff" Siler and Susan Bell. A Memorial Service for Rock will be held at 12:00 pm, Tuesday, March 1, 2022, at St. Andrew's Episcopal Church, with Rev. Dr. Robert Williams officiating. A reception will directly follow the service. Burial will be at 2:30 pm, Tuesday, March 1, 2022, at Mountain Home Cemetery. Honorary pallbearers are Steve Nearn, Ommel Cross, Bob Hurst, Stephen Wood, Alfred Rainey and Sarah Engeler-Young. In lieu of flowers, memorials may be made to the Lions Club, St. Andrew's Episcopal Church or the Mountain Home Fire Department. Arrangements are by Kirby and Family Funeral and Cremation Services - Mountain Home, Arkansas.

The family of Rock Jenkins Engeler created this Life Tributes page to make it easy to share your memories.

Send flowers to the Engeler family.