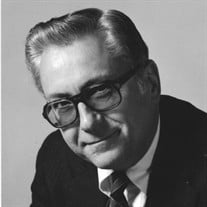 Robert Wiles of Bull Shoals Arkansas died at home Saturday July 10th, 2021. A memorial service will be held at Kirby Tucker Memorial Cemetery Tuesday July 20th at 10 AM with Reverend Blake Brinegar officiating. Bob was born in Massachusetts, the youngest of three children. He served in the Marines during the Korean War with the USMC Radar Squadron 2nd Marine Air Wing, Cherry Point, NC and PeterPoint Field, Camp Le Jeune, NC.A graduate of Purdue University in Electrical Engineering and a member of Eta Kappa Nu, National EE Honorary Fraternity, upon graduating he worked in the Consumer Electronics Industry for thirty-one years before retiring from Matsushita Electric Co. as Quasar Division General Manager of Sales and Marketing. As Vice President of Product Development and Planning of the Magnavox Co., in the Consumer Electronics Division , he introduced the video game “Odyssey”, a forerunner of the modern video game industry. He was also employed by General Electric as an Engineer in the Hermetic Motor Division and as a Product Planner with the Small Appliance Division, where he helped develop the electric carving knife. GE made over $1B on that product. He married his wife Gloria in Chicago, Il. They were married 65 years. He was a member and Elder of the Bull Shoals Presbyterian Church and an Elder of the Presbyterian Church USA. Bob was a lifelong fisherman and particularly enjoyed fly fishing the White River and the many fishing trips with his son for Trout and Steelhead in the Deschutes River in Oregon. He liked gardening, landscaping, photography and carpentry. He enjoyed golf and he had a hole-in-one. He was preceded in death by his parents, brother, sister, and daughter. He is survived by his wife, son, daughters, and their families. In lieu of flowers, memorials may be made to Hospice of the Ozarks.

The family of Robert Edgar Wiles created this Life Tributes page to make it easy to share your memories.

Send flowers to the Wiles family.