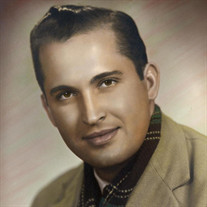 Robert (Bob) died Monday, May 17, 2021 at the Fayetteville Veterans Home at the age of 94. He was born on December 13, 1926 in Dermott, Texas, the son of Robert and Ola Mae Floyd. He married Dorothy (whose maiden name was also Floyd) on May 5, 1951 in Fayetteville, North Carolina. Bob grew up living on large ranches in New Mexico and Texas, including the 4 Dinkus and Felix Klein ranches. Bob joined the Navy September 7, 1944 during World War II. He was stationed at Pearl Harbor and served aboard the Balao-class submarines USS Boarfish, USS Catfish, and the submarine tender USS Nereus. As Bob often said, “Steering a ship in a straight line during a typhoon isn’t as easy as it sounds”. After World War II ended, Bob re-enlisted in the US Air Force. During his time in the US Air Force, he served in the Korean War. Bob retired January 1, 1969 as a Senior Master Sergeant. After Bob retired from the US Air Force, he bought a small ranch in southern Missouri that he operated until his father (who owned a nearby ranch) passed away. In 1973, Bob and Dorothy moved from West Plains, Missouri to Mountain Home, Arkansas, where they built and operated the Dairy Queen. Bob was an early adopter of computer technology and avid computer programmer which he put to good use managing the restaurant’s finances. He designed and developed an inventory and bookkeeping software prompting the Dairy Queen corporate office to inquire about licensing the software for their other stores. They sold the Dairy Queen in 1989. Bob was an aircraft enthusiast. He owned and flew a Cessna 150 and a Cessna 172. He was a member of the Arkansas Civil Air Patrol. Bob’s life was characterized by his love for family and service to community and country. Bob is survived by one son, James Floyd; daughters-in-law, Monna Floyd and Anna Floyd; grandchildren, Holly Floyd (Mandy Grover), April Hand (John), Sara Floyd, Matthew Floyd (Marissa), Amber Simmons (Sloan), Heath Cummings (Lisa Oberpriller), and Tara Castillo (Gabe); great-grandchildren, Phoebe Rivas, Olive Price, Liam Floyd, and Aiya Simmons. He is also survived by sister-in-law, Norma Floyd as well as several nieces and nephews. He was preceded in death by his parents, wife, son Kenneth Floyd, grandson Michael Floyd, and four brothers. In lieu of flowers, the family prefers donations to be made in Bob’s honor to the charity of your choice.

Robert (Bob) died Monday, May 17, 2021 at the Fayetteville Veterans Home at the age of 94. He was born on December 13, 1926 in Dermott, Texas, the son of Robert and Ola Mae Floyd. He married Dorothy (whose maiden name was also Floyd) on May... View Obituary & Service Information

The family of Robert William Floyd created this Life Tributes page to make it easy to share your memories.

Send flowers to the Floyd family.