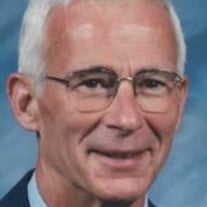 Robert Vern Curtis, 84 of Cherokee Village, Arkansas, formerly of Marshalltown, passed away Wednesday afternoon, June 30, 2021, at the Baxter Regional Medical Center in Mountain Home, Arkansas. A public graveside service will be held at 11:00 a.m. Tuesday, July 6th at Rose Hill Memorial Gardens with full military honors being provided by the combined American Legion and VFW Honor Guard of the local area. In lieu of flowers, Bob wanted any memorial contributions be sent to the Cherokee Village United Methodist Church, P.O. Box 420, Cherokee Village, AR 72525. Born on August 30, 1936 in Richland, Iowa, Bob was the son of Vance and Elizabeth (Harris) Curtis. He grew up in Richland and graduated from the Richland High School. He achieved his bachelor of science degree in pharmacy from the University of Iowa. On August 5, 1959, he enlisted in the United States Army and faithfully served our country as a pharmacist at the Walter Reed Army Medical Center in Washington, D.C. He earned the rank of Sergeant and attained his honorable discharge on July 31, 1965. On October 2, 1976, Bob was united in marriage to Constance “Connie” (Ross) See. The couple made their home and raised their children in Marshalltown where Bob was employed in the pharmacy at the Iowa Veterans Home for 24 years before retiring in 1999. They moved to Cherokee Village in 2002. They are members of the First United Methodist Church and the Cherokee Village United Methodist Church. Those left to cherish his memory are: his wife, Connie; his children: Beth Steffa, Jim (Kristi) Curtis and Connie’s son, Ken (Jill) See; his grandchildren: Tanner (Allison) Metz, Taylor (Josh) Wilson, Noah (Kaitlyn) Curtis, Mackenna Curtis, Austin Steffa, Alissa Steffa and Shawn (Jennifer) Hart; four great grandchildren: Dakoda Curtis, Jackson Metz, Lillian and Preston Hart and a host of nieces and nephews. In eternal life, Bob has been reunited with his parents; his son-in-law, Lawrence “Larry” Steffa; Connie’s daughter, Julie Hart; and his three sisters: Ruth, Frances and Kathryn. Local arrangements are by Kirby and Family Funeral and Cremation Services - Mountain Home, Arkansas.

The family of Robert Vern Curtis created this Life Tributes page to make it easy to share your memories.

Send flowers to the Curtis family.