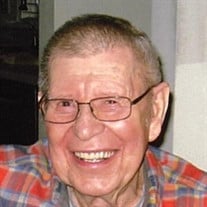 Robert "Boyd" Brackett of Lakeview, Arkansas, died peacefully at home on February 21, 2022, in Lakeview, Arkansas at the age of 90. He was born October 15, 1931, in Oklahoma City, Oklahoma, the son of Roy and Marian Shaw Brackett. He graduated from High School and joined the Army in 1951. Boyd was a Tank Commander and served his country in Korea during the Korean War. He was awarded the Purple Heart after taking enemy fire. After his term in the military, he came back to Oklahoma and went to college to study electronics. He also worked several years in the Oklahoma City Post Office. Boyd moved to Northern California in 1961 and went to work for Station Construction Communication Depart. of the Pacific Gas and Electric company where he worked until he retired in 1987. He was previously married and had a son Ronald and a daughter, Dianne. He was a devoted father. He met and married Faye Margaret Dorothy on June 21, 1975. They spent many happy years together until his death. Upon his retirement, Boyd and Faye built a home in the Sierra Nevada Foothills of Northern California, then they moved to a farm in Seminole, Oklahoma, then moved to Arizona, and finally put down roots in Lakeview, Arkansas where they moved in 1996 and built their home. Boyd is survived by his wife, Faye Brackett of Lakeview, AR; daughter, Dianne (Shane Heidt) Brackett of Fordland, MO and sister, Nancey (Isaac) Onsurez of Reno, NV as well as several nieces and nephews. He was preceded in death by his parents; son, Ronald; sister Sue Bryant; brothers, Larry Hockett and Forrest Baker. A Celebration of Life for Boyd will be 11:00 am, Saturday, March 5, 2022, at Kirby & Family Funeral Home Chapel in Bull Shoals, with Heather Marsalis, Celebrant officiating. In lieu of flowers Memorials may be made to Hospice of the Ozarks, Presbyterian Church of Bull Shoals or the Parkinson's Foundation. Arrangements are by Kirby and Family Funeral and Cremation Services - Bull Shoals, Arkansas. Visit an online obituary and guestbook at www.kirbyandfamily.com.

Robert "Boyd" Brackett of Lakeview, Arkansas, died peacefully at home on February 21, 2022, in Lakeview, Arkansas at the age of 90. He was born October 15, 1931, in Oklahoma City, Oklahoma, the son of Roy and Marian Shaw Brackett. He graduated... View Obituary & Service Information

The family of Robert "Boyd" Brackett created this Life Tributes page to make it easy to share your memories.

Send flowers to the Brackett family.