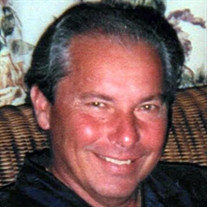 Richard L. (Rich) Ackman II, 69 of Mountain Home, Arkansas passed away on May 9th, 2022 at Hospice House of the Ozarks in Mountain Home following several months of declining health. He was born in Terre Haute, Indiana on October 24, 1952 to Richard L. (Dick) and Yola (Cohen) Ackman of Oblong, Illinois. On December 31, 1977 he married Cynthia (Cindy) McCrory of Robinson, Illinois, who survives. He is survived by a son and daughter in law, Troy and Sandy Ackman of Johnsburg, Illinois, A daughter, Renee (Lani) Ackman of Springfield, Illinois, a step-daughter, Jennifer & Bill Lind of Hoopeston, Illinois; 7 grandchildren, Brandon Ackman, Lindsey Ackman, Jordan Landrey, Rylie Ackman, Zai Ackman, Will Lind and Kennedy Lind. Also surviving is a sister, Vicki Hart of Palm Bay, Florida and an uncle, Edgar and Linda Cohen of Santa Maria, California, brothers in law and sisters in law, Noble and Judy McCrory of Pinkstaff, Illinois, Janice and John Garrard of Robinson, Illinois, plus several cousins, nieces and nephews. He was preceded in death by his parents, and brothers in law, Gary Davis and Don Hart. He was a partner with his father at R.L. Ackman Oil Field Welding for approximately 10 years before accepting the managers position at Quail Creek Country Club in Robinson, Illinois from 1985-1989. Then, in 1990 he accepted the position as General Manager &COO of the Ivanhoe Club in Ivanhoe, Illinois, a far NW suburb of Chicago. From 2006-2014 he was the General Manager at Dairymen's, a private Northwoods resort in Boulder Junction, Wisconsin. In 2015, he and Cindy retired to Grant, Florida where they remained until moving to Mountain Home, Arkansas in 2021. He was an avid golfer and enjoyed traveling in their motor homes and loved doing home remodeling projects. He was a member and past Exalted Ruler of the Robinson Elks Club. Memorials can be made to the IL Elks Children's Care Corporation, P.O. Box 222, Chatham, Illinois 62629 or online at www.Illinoiselksccc.org or to Hospice of the Ozarks, Inc, 811 Burnett Drive, Mountain Home, AR 72653 or online at www.hospiceoftheozarks.org. A celebration of life will be held at a later date in Robinson, Illinois. Arrangements are by Kirby & Family Funeral and Cremation Services. Visit an online guestbook at www.kirbyandfamily.com.

Richard L. (Rich) Ackman II, 69 of Mountain Home, Arkansas passed away on May 9th, 2022 at Hospice House of the Ozarks in Mountain Home following several months of declining health. He was born in Terre Haute, Indiana on October 24, 1952 to... View Obituary & Service Information

The family of Richard "Rich" L Ackman II created this Life Tributes page to make it easy to share your memories.

Send flowers to the Ackman family.