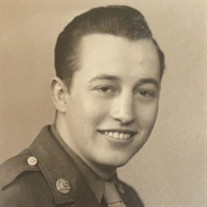 Richard Friedrich Homan was born December 21, 1924, in Liberty Township, Ohio. He was the son of Johanna Hogrefe Homan and Henry Homan. He died peacefully on April 22, 2022, in the presence of family. The youngest of seven children, he worked from an early age to help support his family. In 1942 he enlisted in the US army (9th Division, 60th Infantry) and was assigned to the calvary six weeks before it was disbanded. In 1943, he was transferred to England in preparation for the European invasion. On June 8, 1944, he landed on Utah Beach, Normandy and began advancing to Cherbourg where he was shot two weeks later. He recovered from his injury and returned to the United States where he was training for the invasion of Japan when the war ended. After the war he attended Valparaiso University on the GI bill. He received his Juris Doctorate in 1950 and joined the Federal Bureau of Investigation as a Special Agent. In 1952 he transferred from the criminal unit to the counter-espionage unit where he worked in both the New York and Chicago offices until his retirement in 1978. While at Valparaiso he met his late wife, Mildred Arlene Haerther. Together, they raised five daughters while pursuing careers in public service. He and Mildred retired to Mountain Home, Arkansas. A self-taught carpenter he enjoyed working with his hands and built a home on Lake Norfork big enough to accommodate his large family. He and Mildred became active members of Redeemer Lutheran Church and were involved in state and national politics. Their travels together included a trip around the world and one to Normandy on the 50th anniversary of the invasion. Later in life, he tended his wife through her chronic illness and was resilient in managing the challenges they faced. He entertained those who knew him with his interesting life stories and sense of humor. His daughters and grandchildren remember his enthusiastic encouragement and wise council. He understood each of them as individuals as he creatively engaged them in meaningful activities and adventures. He is survived by his brother, Ralph Homan of Denver, CO; daughters, Susan Cruz (Alberto) of San Antonio, TX, Cynthia Homan Jacobs of Clarksville AR, Celeste Homan Magnani (Timothy) of Fulton, MD, and Lynne Mila (John) of Palm City, FL; son-in-law, Walter Powers; his fourteen grandchildren, ten great-grandchildren; and close friend and caregiver, Trudy Stinnett, of Mountain Home, AR. He was preceded in death by his wife of 74 years, Mildred Haerther Homan; daughter, Kathleen Powers of Burtonsville, MD; brothers Lawrence and Robert; and sisters, Josephine Sheldon, Dorothy Vinings, and Augusta Peck. Visitation will be Wednesday, April 27, 2022 from 5:00 until 7:00 p.m. at Kirby & Family Funeral Home. Funeral services will be 10:00 a.m., Thursday, April 28, 2022, at Redeemer Lutheran Church with Reverend Kevin McReynolds officiating. Burial will be in Kirby's Tucker Memorial Cemetery, Mountain Home, Arkansas, with Brian Powers, Eric Powers, Evan Jacobs, Martin Cruz, Gabriel Cruz, and Christopher Magnani as pallbearers. Military Honors will be provided by the Alley-White American Legion Post #52 and United States Army Honor Guards. The family thanks Hospice of the Ozarks staff. In lieu of flowers, please direct donations to the Myasthenia Gravis Foundation at https://myasthenia.org or Redeemer Lutheran Church at https://www.redeemermtnhome.org. Arrangements are by Kirby and Family Funeral and Cremation Services - Mountain Home, Arkansas. Visit an online obituary and guestbook at www.kirbyandfamily.com.

Richard Friedrich Homan was born December 21, 1924, in Liberty Township, Ohio. He was the son of Johanna Hogrefe Homan and Henry Homan. He died peacefully on April 22, 2022, in the presence of family. The youngest of seven children, he worked... View Obituary & Service Information

The family of Richard F Homan created this Life Tributes page to make it easy to share your memories.

Send flowers to the Homan family.