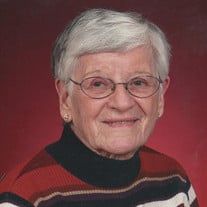 Polly Millhouser of Mountain Home, volunteer and friend extraordinaire, passed away on January 26, 2021 at the age of 102. She was preceded in death by her husband of 47 years, Charles, and their son, Robert. She will be dearly missed by daughters Mary (John) Latta of Minnetonka, MN, and Jean Millhouser of Bartlett, IL, and by grandson Dave (Amy) Latta, of San Diego, CA, and great-grandchildren Jack and Hannah. Polly was born March 22, 1918, in Waukegan, IL. In 1937, at the age of 19, she threw caution to the wind and moved to Honolulu, HI with a dear friend. Polly worked as a secretary for the U.S. Navy at Pearl Harbor and spent her spare time enjoying the beaches and tropical surroundings of the undeveloped island. Life changed with the advent of World War II, bringing rationing, blackouts and other adjustments, but Polly and her friends adapted to the new routine. She met Charles, a U.S. Marine Corps sergeant, when he stopped by her office one day; she caught his eye and by way of introduction he threw a paper clip in her direction. They married in Honolulu on October 21, 1943, and together they formed many lifelong friendships with other couples on the island. After the war Polly and Charles moved to his hometown of Evanston, IL, where their children were born. Later they lived in Arlington Heights, IL, where Polly was a homemaker and school volunteer. When her children got older, she returned to office work through a temp agency, and her work was so close to perfection that many clients asked for her by name year after year. Polly and Charles retired to Mountain Home in 1987. Polly quickly became active in the community, volunteering at the elementary school and the Donald W. Reynolds Library. She loved listening to the first-graders practice reading, and she spent many happy hours shelving books at the library, working at the library book sales, and hosting/attending Friends of the Library meetings. She was honored for her years of service to the library in March 2009, when Baxter County Judge Joe Bodenhamer proclaimed April 25, 2009 as Polly Millhouser Day. Polly stayed active as a member of a casual walking group of friends who for years walked a 3-mile loop at Cooper Park three times a week. She worked out weekly at Curves and was their oldest client when she turned 90. She finally quit putting up her own storm windows when she turned 93. Polly was a long-time member of the First Presbyterian Church, where she served as a deacon. A celebration of life will be held Tuesday, February 2, 2021, at Kirby & Family Funeral and Cremation Services, with Pastor Mike Clark officiating. Due to current restrictions, masks are required. In lieu of flowers, memorials may be sent to the Donald W. Reynolds Library, Mountain Home. Arrangements are by Kirby and Family Funeral and Cremation Services - Mountain Home, Arkansas.

Polly Millhouser of Mountain Home, volunteer and friend extraordinaire, passed away on January 26, 2021 at the age of 102. She was preceded in death by her husband of 47 years, Charles, and their son, Robert. She will be dearly missed by daughters... View Obituary & Service Information

The family of Pauline M. Millhouser created this Life Tributes page to make it easy to share your memories.

Send flowers to the Millhouser family.