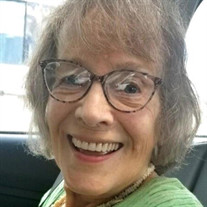 Patricia Laura Kellams died January 28th, 2021, in Mountain Home, Ark. She was 88. She was born September 7th, 1932 in Mankato, Minnesota, the daughter of Ida and Norman Engler Sr. Patricia, who mostly went by Pat, graduated from Hutchinson High School in Hutchinson, Kan., and Hutchinson Community College, where she was crowned homecoming queen in 1951. She married Donald Lee Kellams on December 20th, 1953, in Hutchinson. They were married for 59 years, moving to Cotter, Ark., in 1967 and then settling in Lakeview, Ark., in 1968, where they both lived the rest of their lives. Pat worked as a private kindergarten teacher and then as a first-grade teacher’s aide at Midway Elementary School in Baxter County. She was an avid consumer of newspapers and magazines and always kept up-to-date on political news. She was proud to have been the first woman to wear pants to St. Andrews Episcopal Church in Mountain Home. She was active in local community theater and was a two-time winner of the “Hammy Award.” As she got older, Pat preferred to keep to herself at her home in Lakeview. But when she met new people, even caregivers, she would charm them with her curiosity and sense of humor. She was preceded in death by her husband Donald, her brother Norman Engler Jr., her twin brother Peter, and her step-granddaughter, Jessica. She is survived by three sons, Kurt (Julie) of Calico Rock, Kevin (Nanci) of Fayetteville, and Kyle (Laura) of Fayetteville; five grandchildren, Maggie Crider, Alex Kellams, Kohl Kellams, Katherine Woods and Grace Kellams; one step-grandson, Todd Le Brell; and 16 great-grandchildren; sisters, Donna Wooten of Hutchinson, KS, and Gretchen Stevens of Sheffield, United Kingdom. At her request, no service is planned. Arrangements are by Kirby and Family Funeral and Cremation Services - Mountain Home, Arkansas.

The family of Patricia Kellams created this Life Tributes page to make it easy to share your memories.

Send flowers to the Kellams family.