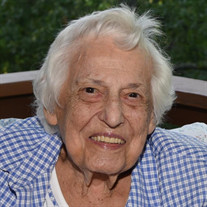 Mildred Haerther Homan, baptised Mildred Arlene, was born on July 14, 1922, in Benton County, IA, to Henry and Elizabeth Haerther. She died peacefully on October 13, 2021, in the presence of family. Mildred grew up in a small farming community where her life-long love of learning was nourished by fond memories of the one-room schoolhouse she attended. Her ambition to see the world was kindled when she enlisted in the Marine Corps during World War II. She was stationed in Washington D.C., where she provided logistical support for the armed services and achieved the rank of sergeant. She marched in President Roosevelt’s funeral procession. After the war, the Serviceman’s Readjustment Act (G.I. bill) made it possible for her to attend Valparaiso University, where she graduated with a BA in History and minors in Government and Education. It was there that she met her husband, Richard Friedrich Homan and they were married in her hometown church in Newhall, Iowa. Together, they raised five daughters while pursuing careers in public service. She furthered her education when her children were grown, receiving an MA from the University of Illinois in US History and Political Science. Mildred taught social studies for twenty years in Illinois public schools, where she was recognized by both students and administrators for her exceptional teaching. The values she taught in the classroom were reflected in her community service and other activities. She was a founding member of Trinity Lutheran Church and served on the local zoning board in Lisle, IL. She supported an international student exchange program and eventually traveled the world to see the friends she made through this program. She retired to Mountain Home Arkansas in 1980 where she and Richard built a home on Lake Norfork. She became an active member of Redeemer Lutheran Church and supported the Mountain Home Christian Clinic and Lutherans for Life. She also became politically active applying her knowledge of American history and government to inform both voters and politicians. She was a two-term Republican National Committeewoman and was an Arkansas elector for President George W. Bush. She was especially interested in ensuring the integrity of election processes and was a founding member of the Twin Lakes Republican Women’s Club. She also served on the Advisory Board of ASUMH and the Governor’s Commission for Veterans Affairs. She was a charter member and former president of the Arkansas Women Marines Association. Mildred is survived by her devoted husband of seventy-four years, Richard; daughters, Susan (Alberto) Cruz of San Antonio, TX, Cynthia Homan Jacobs of Clarksville, AR, Celeste (Timothy) Homan Magnani of Fulton, MD, Lynne (John) Mila of Palm City, FL; son-in-law, Walter Powers; her fourteen grandchildren; nine great-grandchildren; and close friend and care-giver, Trudy Stinnett, of Mountain Home, AR. She is preceded in death by her daughter Kathleen Powers of Burtonsville, MD, sisters Kathryn Haerther of Newhall, IA, and Darlene Koering of Stanwood, IA, brother Waldo Haerther of Largo, Florida, and special family friend Inge Marler of Mountain Home, AR. Visitation will be Wednesday, October 20, 2021, from 5:00 until 7:00 pm, at Kirby & Family Funeral Home. A Funeral Service for Mildred will be 10:00 am, Thursday, October 21, 2021, at Redeemer Lutheran Church, with Reverend Kevin McReynolds officiating. Burial will be in the Kirby's Tucker Memorial Cemetery, Mountain Home, Arkansas, with Brian Powers, Eric Powers, Evan Jacobs, Martin Cruz, Gabriel Cruz, and Christopher Magnani as pallbearers. Military honors will be provided by the Alley-White Post #52 and United States Marines Honor Guards. Due to current restrictions, masks are required. Please send memorials to the Myasthenia Gravis Foundation of America or Lutherans for Life. Arrangements are by Kirby and Family Funeral and Cremation Services - Mountain Home, Arkansas. Visit an online obituary and guestbook at www.kirbyandfamily.com.

Mildred Haerther Homan, baptised Mildred Arlene, was born on July 14, 1922, in Benton County, IA, to Henry and Elizabeth Haerther. She died peacefully on October 13, 2021, in the presence of family. Mildred grew up in a small farming community... View Obituary & Service Information

The family of Mildred Homan created this Life Tributes page to make it easy to share your memories.

Send flowers to the Homan family.