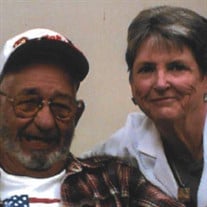 Obituary for Linda R. and Howard "Howdy" Weckesser Linda R Weckesser of Flippin, Arkansas, passed away July 30, 2021, in Mountain Home, Arkansas at the age of 78. Her death follows just four months after her husband of forty years, Howard "Howdy" Weckesser, at the age of 87 on March 22, 2021.. The two were inseparable after they met on a blind date and married June 18, 1981. Linda was born January 23, 1943 in Poseyville, IN and worked for State Farm Insurance for many years. All who knew her would agree she ran the show during that time, including her last job working for Jimmy Sanders. Linda is survived by daughter, Tracy (Michael) Kohler of Zanesville, OH, sons, Jeff Smith of Smithville, OH and Jim (Paula) Smith of Monroe, NC. She was preceded in death by her parents, Vincent and Juana Tate Shelby. Howdy was born on July 21, 1933 in Orrville, OH and retired from Westinghouse and prior to driving a school bus for the Flippin School District. Howard is survived by daughters, Debbie (Monroe) Miller of OH and Linda (Randy) Hinton of Fl. Howdy was preceded in death by his parents Ernest and Leona Cleaver Weckesser and a grandson, Paul Hinton. Between them, they have 13 grandchildren and 8 great-grandchildren. Together, Linda and Howdy enjoyed playing pool where Linda earned the honor of being a Senior Olympic State Champ. They were and integral part of the local music community in the area, the Marion County Senior Center and supporters of the Rea Valley Fire Department. They also loved playing bingo, gardening and their Boston Terriers. A Celebration of Life will be held at a later date. Arrangements are by Kirby and Family Funeral and Cremation Services - Mountain Home, Arkansas. Visit an online obituary and guestbook at www.kirbyandfamily.com.

The family of Linda Weckesser created this Life Tributes page to make it easy to share your memories.

Send flowers to the Weckesser family.