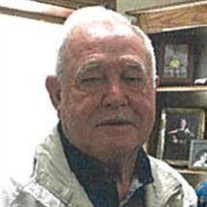 Not sure what to send?

Leo Everett Palmer of Bull Shoals, Arkansas, passed away January 6, 2022, in Mountain Home, Arkansas at the age of 79. He was born June 9, 1942, in Crump, Michigan to Floyd and Lowella Duford Palmer. He grew up in Wisner, Michigan and graduated from Unionville High School. Leo joined the United States Navy in 1958. After graduation, he went to Grosse Isle, Michigan to do his basic training and then get his orders to Quonset Point, Rhode Island and squadron HS13 where he worked on helicopters. His squadron was assigned to the USS Wasp when it was sent to the waters around Cuba to defend against Russia. Leo married his High School sweetheart, Christine Phillips in 1962. He was released from the Navy in 1963, but rejoined going into the TAR program. At the end of 22 years of service he retired from the Navy and built his own home, from cutting down the trees to sawing the trees at the family owned sawmill. Everything that went into building a house was done by Leo and his family and many, many friends. Leo went from working on the Great Lakes preparing bridges and wharves to fixing farm tractors to getting a taste of what it was like working in a factory. His last job was at Mercury Marine in Fond Du Lac, Wisconsin. After surgery for colon cancer, he and Chris decided to retire to Lakeview, Arkansas. Leo is survived by his wife Christine of Lakeview; daughters Ellen (Ben) Kellom off Myerstown, PA and Jennifer (Rick) Johnson of Ashburn ;grandchildren, Kyle, Ryan, Molly & Kira; great-grandchildren, Rosalie, Kayleigh, Maria, Trent, & Shawn and many nephews and nieces. He was preceeded in death by his parents; in-laws; daughter, Amy Jo Monroe; brothers, LD, and Robert; sister-law Sueanne Meyer; granddaughter Ryan K.; and nephew Brian Phillips. He will be missed by family and friends. A Memorial Service for Leo will be 11:00 am, Saturday, January 22, 2022, at Bull Shoals United Methodist Church, with Pastor Pete Beevers officiating. Arrangements are by Kirby and Family Funeral and Cremation Services - Bull Shoals, Arkansas. Visit an online obituary and guestbook at www.kirbyandfamily.com.

Leo Everett Palmer of Bull Shoals, Arkansas, passed away January 6, 2022, in Mountain Home, Arkansas at the age of 79. He was born June 9, 1942, in Crump, Michigan to Floyd and Lowella Duford Palmer. He grew up in Wisner, Michigan and graduated... View Obituary & Service Information

The family of Leo Palmer created this Life Tributes page to make it easy to share your memories.