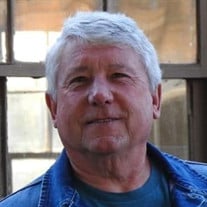 Kevin Clay Moon, of Lakeview, Arkansas passed away and went to be with his Lord on Monday, June 14, 2021. We are here this morning all gathered together to remember as well as celebrate the life of one man, who for a while on this path of life, walked together with each one of us. Kevin was born on May 7, 1955 in Greenfield, Indiana to Clayton and Marcie Moon. He graduated from Nashville High School in 1973 and began working as a lineman for the telephone company, like his father. His younger brother introduced him to his cute coworker named Althea Wilson, and four months later, they were married on May 31, 1975. To this union two children were born. Darcy Lyn Moon of Metter, Georgia, and Bethany Noel Moon, of Saint Louis, Missouri. Out of this heritage came the special blessing of seven awesome grandchildren and two beautiful great-grandchildren from Darcy, plus a few grand-dogs and a really cool grand-cat from Beth. Kevin went to night school while his children were young, studying mathematics and heating and cooling. He earned an Associate’s Degree in HVAC from Denver Tech, and started his own HVAC company which he operated for many years. Kevin worked for the phone company for most of his career, starting out as a lineman, splicer, installer, and finally retiring in DSL and fiberoptics. He was always learning or teaching himself new skills. If he did not already know how to fix or repair something, he would work with someone who knew how to do the job, and then pick up a new skill. He was good at just about everything he set his mind to doing. Kevin was a hard worker. He enjoyed working out, gardening, fixing up the yard, figuring out how to grow fruit trees and blackberry bushes. He loved sudoku, playing poker, and board games with the family. He loved boating, swimming at the lake, paddling kayaks and canoes, and spending time with his family. Kevin was a giver, and was always generous with his time, his talents, and his money. He was patient and calculative. He would teach you how to do something, watch you fumble around at it for a bit, and then strengthen his teaching method for round two, three, and four until you got the hang of it. He taught his family to work hard, to play hard, to serve, and to love Jesus. He was a passionate believer, and he would tear up when he talked about Jesus, angels, and heaven. His service to us in this body of believers took the form of a deacon in which he served well. Kevin was the king of anecdotal story-telling and goofy dad-jokes! If you were around him for very long you knew a story or a joke was coming just from his body language and were laughing, either at the joke or at Kevin’s own response, because no one laughed more at their own jokes than he himself! He and his life have become very much a part of our lives and he will live on in our hearts here on earth as he continues to live even today in that eternal reality with those who have gone before. We will miss Kevin whether Husband, Dad, Grand dad, Uncle, Brother, brother-in-Law, Co-worker, fellow laborer in the Kingdom of God, or a most endeared Friend. Thank You God for loaning him to us for this time on earth.

Kevin Clay Moon, of Lakeview, Arkansas passed away and went to be with his Lord on Monday, June 14, 2021. We are here this morning all gathered together to remember as well as celebrate the life of one man, who for a while on this path of... View Obituary & Service Information

The family of Kevin Clay Moon created this Life Tributes page to make it easy to share your memories.

Kevin Clay Moon, of Lakeview, Arkansas passed away and went to...

Send flowers to the Moon family.