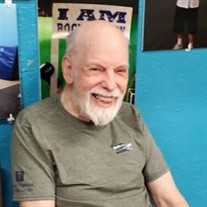 Joseph Francis Stefan, 83, of Mountain Home, Arkansas, passed away January 14, 2022, at his home. He was born November 3, 1938, in Corbettown, Pennsylvania, the son of Steven and Elizabeth Gyulay Stefan. He married Diane Auser on May 11, 1968, in Yorktown Heights, New York. Joe was a U.S. veteran of both the Navy and Air Force and worked as an Field Engineer and Hardware Planner for IBM for 28 years. He lived in Mountain Home since August 1994 after living in New York, North Carolina and Texas. He was a member of St. Peter the Fisherman Catholic Church. He enjoyed both traveling and being at home working outside on the property, fishing, doing puzzles with his grandson Alec, watching old westerns and Star Trek, caring for his many cats and boxing with the Rock Steady Boxing program, a non-contact boxing exercise to fight back against Parkinson's Disease. Joseph is survived by his wife, Diane Stefan of Mountain Home, AR; daughters, Dawn (Jesse) Neighbors of Dunn, NC and Amy (Jason) Doucette of Gainesville, VA; brother, Paul Stefan; sister, Mary Ellen Visconti of PA; and six grandchildren; Allison Beam (Jonathan) of NC; Alec Phillips of Mountain Home; John Neighbors of HI, and Dane Doucette, Colson Speidel and Autumn Doucette of VA. He was preceded in death by his parents; two brothers, Stephen Stefan and John Stefan; and sister, Barbara A Weber. Visitation will be Friday, January 28, 2022, at Kirby & Family Funeral Home Chapel, from 5:00 pm until 8:00 pm, with a Vigil Service at 7:00 pm. A Memorial Mass for Joseph will be 10:00 am, Saturday, January 29, 2022, at St. Peter The Fisherman Catholic Church, with Father Norbert Rappold as Celebrant. Entombment will be at Kirby's Tucker Memorial Mausoleum, following the Memorial Mass, with Jesse Neighbors, Jason Doucette, Alec Phillips, Jimmy Durmon, Haven Jorgenson, Les Bradley, Floyd Menzes and Robert Podsiadlik as honorary pallbearers. Military Honors will be provided by the Alley-White American Legion Post #3246 Honor Guards. Due to current restrictions, masks are required. Memorials may be made to the Rock Steady Boxing program at Mruk Family Center on Aging, 618 Broadmoor Drive, Mountain Home, AR 72653 (make check out to Mruk Center with RSB on the memo line of the check) or to Hospice of the Ozarks, 774 Burnett Drive, Mountain Home, AR 72653 or to a charity of one's choice. Arrangements are by Kirby and Family Funeral and Cremation Services - Mountain Home, Arkansas. Visit an online obituary and guestbook at www.kirbyandfamily.com.

Joseph Francis Stefan, 83, of Mountain Home, Arkansas, passed away January 14, 2022, at his home. He was born November 3, 1938, in Corbettown, Pennsylvania, the son of Steven and Elizabeth Gyulay Stefan. He married Diane Auser on May 11, 1968,... View Obituary & Service Information

The family of Joseph Francis Stefan created this Life Tributes page to make it easy to share your memories.

Send flowers to the Stefan family.