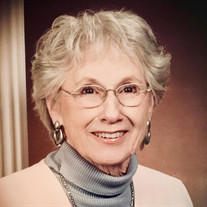 Jo Ann Lilley Bell of Sanger, Texas went to be with her heavenly Father on June 13, 2021 in Mountain Home, Arkansas at the age of 90. She was born on October 9, 1930 in Williamsville, Attala County, Mississippi, the daughter of Josephine (Shelley) and Jeff Burleson Lilley. On September 5, 1953, she wed her favorite, Joseph Loffette Bell in Gladewater Texas. Of this union, two children were born. Joseph Kim Bell, of Hartville, Missouri and Karen Kay Bell Maupin of Mountain Home, Arkansas. Jo Ann attended Kilgore Junior College in Kilgore, Texas and East Texas Baptist University of Marshall, Texas where she was an active member of the sorority, Sigma Iota Chi. She obtained her degree in English and Business Education from Texas State University in San Marcos, Texas where her daughter enjoyed attending classes with her and eating in the student union from time to time. Jo Ann had several interesting places of employment during her working years. She was an administrative assistant to the Dean of Agriculture at Texas Tech University in Lubbock, Texas and also worked as an assistant to the base commander of Dyess Air Force Base in Abilene, Texas. After the retirement of her husband, Joe, she enjoyed a few years working as a teacher’s aide at Sanger High School where she and Joe regularly attended basketball games to cheer on the Sanger Indians. Jo Ann was a wonderful homemaker and enjoyed having others in her home. Lively tables of Texas 42 were often played in the Bell household and a pot of red beans and cornbread were in regular attendance. She loved and enjoyed her family immensely and her church family as well. Jo Ann was always involved in the ministry of her church, teaching Sunday School for many years. She also enjoyed participating in Women’s Study Club, and community and charity events. She is best described as a “people person.” Her delight in others was a blessing to all who knew her. She is survived by her son, Joseph Kim Bell (Tena) of Hartville, Missouri and daughter, Karen Bell Maupin (Gary) of Mountain Home, Arkansas; brother, Robert Lilley of Thibodaux, Louisiana; seven grandchildren, Joseph Allen Bell, Jett Bell, Allison Richard, Luke Richard, Jennifer Bell Fluitt (Joey), Matthew Bell (Alana), and Amy (Preston) Bell Friend; twelve great grandchildren; and numerous nieces and nephews. She is also survived by some Louisiana cousins whom she dearly loved. She was preceded in death by her beloved husband and parents; a sister, Kay Lilley Norris; and brothers, Jeff B. Lilley, Bill Lilley, and Ronald Lilley. A graveside celebration of life will be held at Sanger Cemetery in Sanger, Texas on Friday, June 18, 2021 at 10:00 a.m. Flowers will be accepted at Kirby & Family Funeral Home in Mountain Home, Arkansas. Memorials may be made to the Good Samaritan Society of Mountain Home or Hospice of the Ozarks, 811 Burnett Drive, in Mountain Home, Arkansas. “Her children rise up and call her blessed; her husband also and he praises her; Many women have done excellently, but you surpass them all. Charm is deceitful, and beauty is vain, but a woman who fears the Lord is to be praised.” Proverbs 31:28-30 Arrangements are by Kirby and Family Funeral and Cremation Services - Mountain Home, Arkansas.

Jo Ann Lilley Bell of Sanger, Texas went to be with her heavenly Father on June 13, 2021 in Mountain Home, Arkansas at the age of 90. She was born on October 9, 1930 in Williamsville, Attala County, Mississippi, the daughter of Josephine (Shelley)... View Obituary & Service Information

The family of Jo Ann Bell created this Life Tributes page to make it easy to share your memories.

Jo Ann Lilley Bell of Sanger, Texas went to be with her heavenly...

Send flowers to the Bell family.