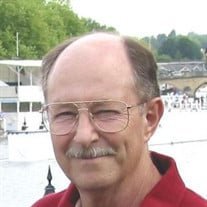 Jimmy Leon McLean, 77, of Lakeview, AR passed away at Mountain Home, AR, from heart failure on January 21, 2022. He was born January 24, 1944, in Sayre, Oklahoma, to Willie Mae Boyd and Percy Lowell McLean. Jimmy was a retired Air Force officer and command pilot. He graduated with a BS from Oklahoma State University in 1968, and the same year he attended the Air Force Officer Training School at Lackland AFB, Medina Annex, San Antonio, Texas, where he, and his future wife, were both commissioned second lieutenants. He flew B-52s during and after Vietnam, followed by a staff assignment at HQ Strategic Air Command, Offutt AFB, Omaha, Nebraska. Later in his career, he was assigned to the 9th Reconnaissance Wing, 99th Strategic Reconnaissance Squadron at Beale AFB, Yuba City, California, where he flew the U-2 Dragon Lady, becoming one of less than 1,000 pilots who have soloed in the single-seat, single-engine, reconnaissance and surveillance aircraft, routinely flying at altitudes over 70,000 feet, near space, wearing a full pressure suit like those worn by astronauts. His last assignment was as commander of the U-2 Depot at Warner-Robbins AFB,Warner-Robbins, Georgia. After retirement, Jimmy and Cheryll resided for several years in Mexico Beach,FL, then in 2005, they moved to Lakeview, Arkansas. Jimmy enjoyed boating and fishing on Bull Shoals lake, RVing, taking cruises, woodworking, and driving his 50th Anniversary model Corvette. He was a member of the Bull Shoals VFW and the Mountain Home ELKs. Jimmy is survived by wife, Cheryll and brothers Jack (Dorothy) of Chandler, OK and Jerry (Donna) of Yukon, OK. Burial will be at a later date at Arlington National Cemetery. In lieu of flowers, please make a donation to the Tunnels to Towers Foundation, 2361 Hylan Blvd. Staten Island, NY 10306. Services will be private.

The family of Jimmy Leon McLean created this Life Tributes page to make it easy to share your memories.

Jimmy Leon McLean, 77, of Lakeview, AR passed away at Mountain...

Send flowers to the McLean family.