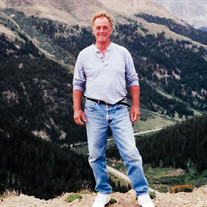 James Barritt of Lakeview, Arkansas went to be with Jesus in his eternal home on December 5, 2021 at the age of 82. Jim was the second son born to Louie and Margaret Barritt on December 14, 1938 in Cedar Rapids, Iowa. His family moved to Omaha, Nebraska, of which Jim was not a fan. But when the family moved to Southern California, Jim loved it. After high school, he joined the Army where he was stationed in Italy and served in the military police. After the Army, he received an Associate Degree at Mt. San Antonio College. Jim was the successful owner of a franchise restaurant in El Monte, California. Not surprising because he was a natural born salesman. He owned the Tastee Freeze restaurant for 14 years. After moving to Southern Oregon, he built a log home. Jim was proud of these accomplishments but none more than the transformation in his life after accepting the forgiveness of Jesus for his sins (and yes there were plenty) and making him his Lord in August of 1991. In 1994, he met Margie Johnson through a mutual friend and the love story began. They were married in Hawaii in 1998 and moved to Colorado. After a mission trip to Biloxi, MS after hurricane Katrina, they visited the Ozarks and fell in love with it. Within two years they moved Arkansas. Because of lost loves and broken relationships, Margie’s family became Jim’s to love. He is survived by his wife of 23 years, Margie Barritt, brothers Bob (Ethel) Barritt and Tom (Lena) Barritt, sister Linda (Gary) Yaruss, daughters Chandra (Steve) Otts and Stacy Pederson, and son Jesse (Melisa) Johnson, son-in-law Andrew White, eight grandchildren and two great-grandchildren. Jim loved the outdoors, people, and his church family at Twin Lakes Baptist Church. He will be remembered for his roast turkey, Lagerfeld cologne, blue eyes, story-telling, tender spirit, and loving heart. He was loved by many and died loving God. A memorial service will be held on Sunday, December 12, at 2 pm at Twin Lakes Baptist Church with Dr. Sam Bailey officiating. In lieu of flowers, memorials may be made to Twin Lakes Baptist Church or Hospice of the Ozarks. Arrangements are by Kirby and Family Funeral and Cremation Services - Mountain Home, Arkansas. Visit an online obituary and guestbook at www.kirbyandfamily.com.

James Barritt of Lakeview, Arkansas went to be with Jesus in his eternal home on December 5, 2021 at the age of 82. Jim was the second son born to Louie and Margaret Barritt on December 14, 1938 in Cedar Rapids, Iowa. His family moved to Omaha,... View Obituary & Service Information

The family of James "Jim" Edward Barritt created this Life Tributes page to make it easy to share your memories.

James Barritt of Lakeview, Arkansas went to be with Jesus in...

Send flowers to the Barritt family.