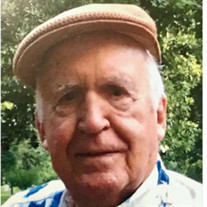 James Carroll Avery went to be with his Lord, on July 12, 2021. He died peacefully at home. Shortly after Jim’s birth in Bradford, NH, his family moved to Fort Covington, NY, where he enjoyed an idyllic childhood. When he was twelve his family moved to Michigan. In high school in Sturgis, Michigan, he excelled in football, baseball, and basketball. His senior year, his family moved to Clearwater, FL where he graduated and excelled in sports there as well. Jim was offered football scholarships to University of Florida, University of Georgia, and Miami University However, the war was on and he felt led to serve his country. He joined the Navy and served in the Asiatic/Pacific from 1944-1948. He married his high school sweetheart, Wilma “Woodie’ Warrington, with whom he had four handsome sons. They were married 32 years until her death in 1981. Following the war, Jim attended Florida State University, University of Tennessee/ Martin, and graduated from Western Michigan University, after which, he and Woodie settled in New Smyrna Beach, FL, where they raised their family. Jim worked for the Florida East Coast Railroad, taught Physical Education in the public schools, and was a citrus grower. His greatest pride was his orange grove located in New Smyrna Beach, Florida. He made Avery Groves into a showplace, well-known among customers who enjoyed visiting the beautiful setting and the buying the delicious Indian River fruit. Jim married Virginia Aylor Browning in 1985 and moved to Bull Shoals, AR, where they lived for for 35 1/2 years until his death. They made many wonderful memories traveling, and enjoying the beauty of the Ozarks. Jim, always the athlete, enjoyed swimming his half-mile workout in the lake, as well as golf and tennis. Because of his declining health, he was unable to attend church the last few years, but he enjoyed listening to gospel music, and worshiping God through reading his Bible and prayer. He is preceded in death by his brother, Richard Avery; sister, June Hocker; sons, William Avery; and Michael Avery. He is survived by his wife, Virginia Avery of Bull Shoals; sons, James C. Avery, Jr. and Matthew Kyle Avery of Fort Worth, TX.; one grandson, Shane Avery (Natalie) of Georgia; one sister, Sharon Gill (Donn) Sturgis, MI; daughter-in-law, Donna Avery; and nieces and nephews. He will be interred in Florida at a later date. Arrangements are by Kirby and Family Funeral and Cremation Services - Mountain Home, Arkansas. Visit an online obituary and guestbook at www.kirbyandfamily.com.

James Carroll Avery went to be with his Lord, on July 12, 2021. He died peacefully at home. Shortly after Jim&#8217;s birth in Bradford, NH, his family moved to Fort Covington, NY, where he enjoyed an idyllic childhood. When he was twelve... View Obituary & Service Information

The family of James Carroll Avery created this Life Tributes page to make it easy to share your memories.

Send flowers to the Avery family.