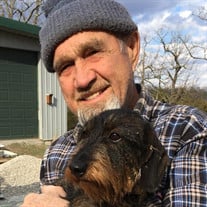 Herman Wenzel "Herman the German" of Mountain Home, Arkansas, passed away April 22, 2022, in Mountain Home, Arkansas at the age of 85. He was born July 31, 1936, in Wladyslawowo, Poland, the son of Erich and Adelgunde Schoen Wenzel, while escaping the Russians with family. After fleeing as refugees, his family settled in Rhineland, Germany, when he was 3 years old. At the age of 14, he and his younger sister, Irene who was 12 years old, immigrated to the United States. His parents were not able to immigrate with Herman and Irene because of health restrictions and immigration quotas. He and Irene were able to come to live with their aunt on a farm in Illinois, where he worked day and night until he was old enough to join the Air Force. He proudly served in the United States Air Force for four years, from 1954 - 1958, and gained his naturalized citizenship while serving. He was a light and medium-weight champion on the Air Force boxing team in Germany. He married Eva Fetting in October of 1964, in Chicago. He was a very proud member of the Local 150 Operating Engineers and served as an officer of the union for 10 years. He received his 50 year gold watch and plaque in 2014. He loved living in Mountain Home after retiring here, 21 years ago. Hunting and gardening were his big passions. He had his own vineyard of grapes in Illinois and in Mountain Home and was famous for "Herman's Special Wine." He raised and flew homing pigeons for 50 years in Illinois. After coming to Mountain Home, he started breeding and raising Arauncona Chickens, that lay green eggs. Herman never stopped improving and beautifying our acreage; he dug ponds, cut down dead trees for firewood, and planted many fruit trees. He loved his life here. Herman designed and constructed his own weight-lifting equipment in Illinois. When he moved to Mountain Home, the weight-lifting equipment came with him and he continued to exercise daily. Herman was an excellent dancer who loved dancing. When Herman started dancing, he could get everyone to join in with him. Herman is survived by his beloved wife of 57 years, Eva Wenzel of Mountain Home, AR; two sons, Adam (Karen) Wenzel of Bethlehem, PA, and Eric (Marcia) Wenzel of Lindenhurst, IL; two grandchildren, Valerie and Gavin Wenzel of Lindenhurst, IL; sister, Irene (Tom) Weis of Gassville, AR; sister-in-law, Sandy Wenzel of Willow Springs, IL; brother-in-law, John (Carol) Fetting of Plainfield, IL; sister-in-law, Renee (Bud) Healey of Bradenton, FL; numerous nieces and nephews; and many friends, including Marge and Bill Anderson of Gainsville, MO, Bob and Donna Siple of Mountain Home, AR, Larry and Nancy Johnson of Mountain Home, AR, and many more across several states, too numerous to count, as he was loved by many. He was preceded in death by his parents; three brothers, Julius Wenzel, Sigmund Wenzel, and Willie Wenzel; and sister, Else Wenzel Hainke. Funeral Services will be private. In Herman's memory, donations may be made to the Arbor Day Foundation, https://shop.arborday.org/campaign/reforestation-donation/give. Arrangements are by Kirby and Family Funeral and Cremation Services - Mountain Home, Arkansas. Visit an online obituary and guestbook at www.kirbyandfamily.com.

The family of Herman Wenzel created this Life Tributes page to make it easy to share your memories.

Send flowers to the Wenzel family.