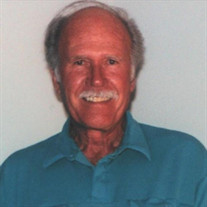 Gaines Leland Hoff, 88, of Mountain Home Arkansas, passed away on Tuesday, January 12th, 2021, at his home. He was born on July 23rd, 1932 in Oakland California. He was born to the late Adolph and Golda (Vogt) Hoff. He attended high school at Fremont High, in Oakland California, where he lettered in track. In 1953, he joined the Air Force, taking training in Valdosta Georgia, becoming a firefighter. He was then sent to Paris France, for two years. Gaines returned to California, where he went to work for Pacific Bell Telephone Company. In 1960, he met Jackie Robbins. They married on January 21, 1961. He is survived by one son, Brian Hoff (Mary) of Rogersville Missouri; daughters, Alica Rutherford (Chris) of Gainesville; Kim Uchtman (Wes) of Gainesville; four grandchildren, Joshua Lyman (Brittany), Springfield Missouri; Logan Stone (Katy), Forsyth Missouri; Amanda Hoff, Springfield Missouri; Will Uchtman, Gainesville Missouri and one great-grand daughter, Piper Stone. He was proceeded in death by his parents, Adolph and Golda Hoff and brother, Charles Hoff. Gaines spent many years with the telephone company, transferring from Pacific Bell to Southwestern Bell of Missouri. He retired early from Aeroquip in Mountain Home Arkansas to continue work on his farm in Gainesville Missouri. He was a member of the Masonic Lodge in Oakland, CA and transferred his membership to the Willard, MO Masonic Lodge, where it remained for 50 years. He was also a member of the Abou Ben Adhem Shriners in Springfield Missouri for 40 years. He joined the Presbyterian Church as a young adult and remained a member of the First Presbyterian Church of Mountain Home. He thoroughly enjoyed the many family road trips he took every summer. He enjoyed golf and spending time on the lakes with family and friends. He was such a loving father, husband and always a perfect gentleman. A Celebration of Life will be held at a later date. In lieu of flowers, donations can be made to the First Presbyterian Church, 1106 Spring Street, Mountain Home, AR 72653; First Christian Church, P.O. Box 125, Gainesville, MO or Hospice of the Ozarks, 811 Burnett Dr, Mountain Home, AR 72653. Arrangements are by Kirby and Family Funeral and Cremation Services - Mountain Home, Arkansas. Visit an online obituary and guestbook at www.kirbyandfamily.com.

Gaines Leland Hoff, 88, of Mountain Home Arkansas, passed away on Tuesday, January 12th, 2021, at his home. He was born on July 23rd, 1932 in Oakland California. He was born to the late Adolph and Golda (Vogt) Hoff. He attended high school... View Obituary & Service Information

The family of Gaines Leland Hoff created this Life Tributes page to make it easy to share your memories.

Send flowers to the Hoff family.