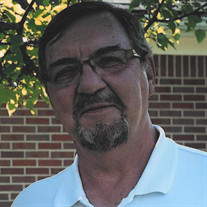 Francis A. Sinning II of Mountain Home, Arkansas, passed away December 28, 2020, in Mountain Home, Arkansas at the age of 72. He was born January 17, 1948, in Mountain Grove, Missouri, the son of Francis and Doris Tindall Sinning. He married Pamela LaRue on March 7, 1970, in Van Wert, Ohio, and was a controller for Thermo Fisher Scientific and Epoxyn Products LLC. Frank lived in Arkansas since moving from Upper Sandusky, Ohio in 1998. He was a member of the Elks BPOE 1714. He enjoyed cooking, golfing, and was a member and former President of the Master Gardener's. Frank was a kind and generous person who would do anything for anyone. He loved and adored his grandchildren. Frank is survived by his wife, Pamela Sinning of Mountain Home, AR; two sons, Matthew Sinning of Tipp City, OH and Nathan (Melissa) Sinning of Rockford, OH; eight grandchildren, Allison, Ethan, Owen, Annie, Emree, Lani, Jackson, and Stella; four brothers, Dennis (Carol) Sinning of Olathe, KS, Kenneth (Sharon) Sinning of Van Wert, OH, David (Paula) Sinning of Van Wert, OH, and Alex (Ronda) Sinning of Ohio City, OH. He was preceded in death by his parents, and a half-brother Richard Sinnings. Memorials may be made to Salvation Army of Mountain Home or the Mountain Home Food Basket. Arrangements are by Kirby and Family Funeral and Cremation Services - Mountain Home, Arkansas.

The family of Francis A Sinning II created this Life Tributes page to make it easy to share your memories.

Francis A. Sinning II of Mountain Home, Arkansas, passed away...

Send flowers to the Sinning family.