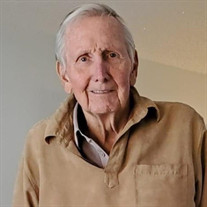 Egbert "Edward" Gritters of Mountain Home, Arkansas, passed away November 5, 2021, in Mountain Home, Arkansas at the age of 81. He was born April 25, 1940, in Chicago, Illinois, the son of Herman and Harriet Bultema Gritters. Ed was a U.S. Army veteran and was a general manager. He married Kathryn Derks on December 3, 1976, in Munster, Indiana. Ed lived in Mountain Home since moving from Del Rio, Texas, in 1996. He was a member of the Mountain Home Elks Lodge #1714. He enjoyed golfing, fishing, and spending time with his family. Ed is survived by his best friend, Nora Treat of Mountain Home, AR; two daughters, Sandra (Bruce)Slazyk and Tamara (Thomas) Burke; two brothers, Roger (Phyllis) Gritters and Harry "Don" Gritters; sister, Diane (Keith) Zigterman; nine grandchildren; and 14 great-grandchildren. He was preceded in death by his parents; wife, Kathryn Gritters; son, Brent Freehauf; two brothers, John Gritters and Robert Gritters; and sister, Myrtle DeYoung. Visitation will be from 3:00 pm until 6:00 pm, Tuesday, November 9, 2021, at Kirby & Family Funeral Home. Funeral Services will be held in Lansing, Illinois. Burial will be in the Oak Ridge Cemetery, Lansing, Illinois. Military Honors will be provided by the United States Army Honor Guard. Due to current restrictions, masks are required. Memorials may be made to Hospice of the Ozarks. Arrangements are by Kirby and Family Funeral and Cremation Services - Mountain Home, Arkansas.

The family of Egbert Gritters created this Life Tributes page to make it easy to share your memories.

Send flowers to the Gritters family.