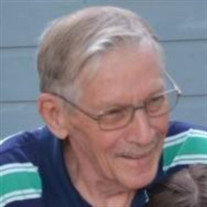 Earl H. Masters Jr., known to all as Butch, died April 6, 2021, at Twin Lakes Therapy and Living in Flippin, Arkansas. He was born June 15, 1937, in Rochelle, Ill., the first child of Earl H. “Dutch” Masters Sr. and Rose Melton Masters. He was later joined by two brothers, Eugene “Skip” and Kenny. The family settled in Oregon, Ill., where he attended public school, played sports and graduated from Oregon Community High School in 1955. For a career, he followed in his father’s footsteps in the plumbing business. In 1973, Butch and wife Linda, moved to Bull Shoals where he worked for Garkey Plumbing and helped plumb Bull Shoals Hospital. He later owned Masters Plumbing for 28 years, before retiring in 2010. Butch served as a volunteer fireman with Oregon and Bull Shoals fire departments and was a relief driver for Marion County Senior Center Meals on Wheels delivery to Bull Shoals. He always was available to help with any community project and loved dogs and children. A plumbing customer once asked him, “How come you called my dog by name, but can’t remember mine?” One great joy in his life was forming a clown act in Illinois with his friend, Jim Barnes, which Linda later joined. After moving to Bull Shoals, he and Linda continued to clown, often appearing in parades and at community events. He was an avid NASCAR and St. Louis Cardinals fan. His gift was creating laughter and fun for others, and in retirement, loved a weekly shopping trip to Walmart where he kidded and joked with every child in the store. He is survived by wife Linda; four children, Scott (Sandy) Masters, Stephen (Linda) Masters, Jill (Paul) Inman and Cindy (Griff) Wirth, all of Colorado; brother, Kenny of Illinois, 12 grandchildren, Michael, Tom, Matt, Amanda, Samantha, Shane, Samantha, Taylor, Katie, Joseph, Desmond and Danielle; five great-granddaughters, Sydney, Mariah, Mackenzie, Paislee, Abigail and Emily; two nephews, Kenny Jr. and Mark; a niece, Molly; and two great-nephews, Griffin and Wes. He was preceded in death by his parents and brother, Skip. A private service will be held later at Newton Flat Cemetery. Memorials may be made to Hospice of the Ozarks or Christ by the Lake Lutheran Church. Arrangements are by Kirby and Family Funeral and Cremation Services - Bull Shoals, Arkansas.

The family of Earl "Butch" Harvey Masters created this Life Tributes page to make it easy to share your memories.

Send flowers to the Masters family.