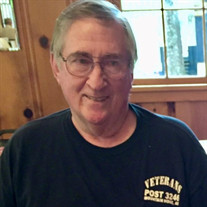 Doug Rose of Midway, Arkansas passed away on Saturday, January 15, 2022 at Baxter Regional Medical Center. He was born September 25, 1942 in Melrose Park, IL, the son of Robert and Florence (Foy) Rose. Doug was a 1960 graduate of East Leyden High School in Franklin Park, IL and a 1966 graduate of Eastern IL University, where he was a proud member of Phi Sigma Epsilon. He considered his college years to be the happiest time of his life. Upon graduating with a degree in business, Doug began working in management at Jewel Food Co. in the Chicago area. He was drafted into the U.S. Army in 1967 and spent 15 mos. stationed at Long Binh Post in Viet Nam. Upon his honorable discharge, he resumed his career with Jewel. In 1982, he became the owner and manager of “Doug’s Dugout”, a sports bar & grill in his hometown of Northlake, IL. In 1996 at the age of 53, he retired to Midway, AR and immediately joined VFW Post 3246, Mountain Home. He was a volunteer van driver for a number of years, taking fellow veterans to their doctor appts in Little Rock. Doug also served a term as Quartermaster of the post and he helped out with bingo. He considered his VFW friends to be his family. Doug was a big guy with a big heart who lived life his way. He was never without a dog (or 2 or 3) his entire life. He was fiercely independent, generous to a fault, and had a wry sense of humor that caught you off guard. He was loved. Doug is survived by his younger sister, “Cookie”; his brother-in-law, Bud; two nieces, a nephew, their families; and several cousins. He was preceded in death by his parents; and most recently by his beloved boxer, Midas. As per Doug’s wishes, there will be no service. Memorials would be appreciated to the Humane Society of North Central Arkansas or VFW Post 3246, Mountain Home. Arrangements are by Kirby and Family Funeral and Cremation Services- Mountain. Home, Arkansas. Visit an online obituary and guestbook at www.kirbyandfamily.com.

Doug Rose of Midway, Arkansas passed away on Saturday, January 15, 2022 at Baxter Regional Medical Center. He was born September 25, 1942 in Melrose Park, IL, the son of Robert and Florence (Foy) Rose. Doug was a 1960 graduate of East Leyden... View Obituary & Service Information

The family of Douglas Scott Rose created this Life Tributes page to make it easy to share your memories.

Doug Rose of Midway, Arkansas passed away on Saturday, January...

Send flowers to the Rose family.