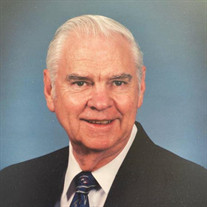 Dickey Lee Baltz passed away on February 28, 2021 at the age of 92. He was born November 1, 1928, the younger son of Lillian and V. Merle Baltz. He grew up in Eminence, Missouri, where he first fell in love with the idea of flying. Since the Air Force Academy had not yet been founded, he entered the United States Naval Academy in 1947 after high school graduation. He graduated from the academy in 1951 and was commissioned a second lieutenant in the United States Air Force, moving immediately to flight school in Hondo, Texas. Flying was his passion, and his career as an Air Force pilot included some 10,000 hours in nearly a dozen different craft. He served as a reconnaissance pilot in the Korean war and also flew missions in the Vietnam war. His military awards include the Distinguished Flying Cross as well as medals for meritorious service in both Korea and Vietnam, and several other medals of merit and commendation. Dick’s military career included a number of years as Executive Officer to the Director of Reconnaissance at the Pentagon, as well as assignments in Japan and Addis Ababa, Ethiopia. As Air Attaché in Ethiopia, he led efforts to establish a library for the Ethiopian Air Force Academy. He received a gold medallion in a personal audience with Emperor Haile Selassie for his service. Dick retired as a Lieutenant Colonel in 1974. Dick married Erma Loreta Howard of Columbia, Missouri, in 1956, and they had four children. After Erma’s death, he married Donna Lee Garverich of Denver, CO, who also preceded him in death after 42 years of marriage. Upon retirement from the Air Force, Dick worked at General Dynamics Electronic Division in San Diego, California until his second retirement in 1983. He moved to Mountain Home, Arkansas and embarked upon a third career as a math teacher at the local community college (later the Arkansas State University-Mountain Home) and tutor for many students in the Twin Lakes Literacy Program. He also devoted himself to a new set of passions, learning to play the piano, paint in oils and water colors, ring handbells and sing in the church choir at First United Methodist Church. He was an ardent bridge player, winning both local and state tournaments. He cherished the many lifelong friendships he developed. He was an enthusiastic fisherman, especially during trout season, and loved to take his grandchildren out in his boat. He was also a patient gardener, passing on his green thumb to his daughter Susan. Dick’s finely honed sense of humor was always gentle, just as his sense of pride in and love for his three daughters and his five grandchildren was unwavering and steadfast. He was the beloved father and father-in-law to Anne and Dave Rodrick (Spartanburg, SC), Susan and Steve Hibbits (Columbia, IL), and Jane and Dave Hokeness (Mequon, Wisconsin), and the best grandpa ever to Elizabeth, Kate, Mary, John, and Julie. He also leaves behind several great grandbabies, who will grow up hearing stories about their silly, loving great-grandpa. Interment will take place at Jefferson Barracks National Cemetery in St. Louis County. A memorial service at First United Methodist Church of Mountain Home, for both Dick and Donna, will take place June 26, 2021 at 10:00 am. Memorials may be made to the First United Methodist Church of Mountain Home or the Donald W. Reynolds Library.

Dickey Lee Baltz passed away on February 28, 2021 at the age of 92. He was born November 1, 1928, the younger son of Lillian and V. Merle Baltz. He grew up in Eminence, Missouri, where he first fell in love with the idea of flying. Since the... View Obituary & Service Information

The family of Dickey Baltz created this Life Tributes page to make it easy to share your memories.

Send flowers to the Baltz family.