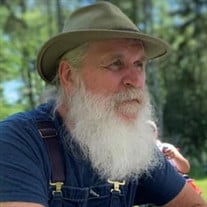 David Martin Chaploney of Gouldsboro, Maine, passed away January 30, 2022 at the age of 70. His family and friends are deeply saddened by their seemingly sudden loss. Comfort is found in our faith that he has gone to be with our Father in Heaven. David was born November 10, 1951, in Bath, New York to Benjamin and Mary Lukacko Chaploney. After growing up on the family farm in Bradford, New York, David married his best friend and soulmate, Sondra Walrath on July 18th, 1970. They recently renewed their vows on their 50th wedding anniversary in 2020 at their beautiful home in Gouldsboro. Together, Dave and Sondra raised three children who went on to give them seven grandchildren and five great grandchildren. He was a dedicated father and loving Grandpa. Everyone who met him fell in love with his calm, laid back demeanor. He knew exactly who he wanted to be, and lived that life unapologetically. When hearing his life story, one would think he led several full lives. As a young newlywed with a daughter on the way, David was drafted into the U.S Army. He served for a year in the Vietnam war. After returning home, they moved to Fort Hood, Texas to finish the remainder of his service as a helicopter mechanic and added a son to the family. From there, they moved back to Bradford, NY where they lived for 27 years. During this time, David worked at the Dresser Rand while working the farm and raising his family that had now grown by one more son. They even owned and operated a bar for six years, during which time he received his loving nickname "My Sweetie." His wife only introduced him as "My Sweetie" from this point on. In 2001, they sold the family farm to their daughter and son-in-law, and moved 700 miles to Milbridge, Maine. Dave and Sondra opened "My Sweeties Bed and Breakfast'' in the coastal town while also running the Chaploney Construction business with their two sons. At the age of 55, he and his wife purchased 15 acres of dense Maine woods in the town of Gouldsboro. With their two sons, they cleared the land and built their homes and new business by hand. Dave and Sondra’s home is so intricately constructed, that folks would stop by to take a tour and admire it. Regretfully, he went to Heaven before fully completing his masterpiece. When it comes to David’s craftwork, everything must be done just so before calling it finished. David was well known for his most recent family business: Downeast Coal and Stoves in Gouldsboro, Maine. Everyone who met him loved him instantly. He had a distinct look with his long white beard and bibbed overalls, a fashion statement he stuck to for over 35 years! He took advantage of his unique look by dressing up as Father Christmas for children in both New York and Maine. His wife dressed as Mrs. Claus while some of his grandchildren wore elf costumes! David has always had a love for gardening and spent the last several years growing his locally famous garden on his homestead. In the winter months, he could be found knitting the best potholders and dishcloths you’ve ever seen or working on challenging puzzles by the coal stove. Dave and Sondra spent their last years together in partial retirement, going on amazing cross-country adventures in their camper. David is predeceased by his parents Benjamin and Mary Chaploney; sister, Christine Chaploney; brother, Joseph Chaploney; brother and sister in-law, Butch and Bonnie Walrath. David is survived by his wife, Sondra; their children, Mary Jane (Peter) Lucas, William (Sarena) Chaploney, and Seth (Amber) Chaploney; grandchildren, Cierra Chaploney (Nicholas Kottwitz,) Mikayla Lucas (James Kelley,) Benjamin Lucas (Tara Thompson,) Collin Chaploney (Elizabeth Veley,) Julia Chaploney, Kylee Chaploney, and Austin Chaploney; great grandchildren, Kyen Kottwitz, Sophia Kelley, Aryson Kottwitz, Audra Kottwitz, and Kallum Kottwitz; his sister, Suzanne Chaploney (James Burcsu); sisters in-law, Donna (Gib) Mathews, and Joan Moyer; brother in-law, David (Candi) Walrath; and several nieces and nephews. A celebration of life will be held on April 16th, 2022 from 2-6pm at the Bradford firehall. A second memorial will be held in Gouldsboro, Maine on April 30th. Further details will be published in the Gouldsboro newsletter. In lieu of flowers, the family requests you plant a fruit tree in David’s name. ~ It’s hard to forget someone who gave you so much to remember ~

David Martin Chaploney of Gouldsboro, Maine, passed away January 30, 2022 at the age of 70. His family and friends are deeply saddened by their seemingly sudden loss. Comfort is found in our faith that he has gone to be with our Father in Heaven.... View Obituary & Service Information

The family of David Chaploney created this Life Tributes page to make it easy to share your memories.

Send flowers to the Chaploney family.