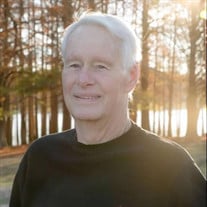 Bud Keirn went peacefully from his home in Mountain Home, Arkansas, to be with the Lord on August 10th with his daughters, Raquel and Lesley Artyn, wife Christy, and sister Rebecca at his side. He was 78. Bud was born in Greenwood, Mississippi to the late Claud Leake Keirn Jr. and Margaret Campbell Keirn. Bud graduated from Greenwood High School where he was the starting quarterback for the football team his senior year. Baseball, however, was his favorite sport, excelling from little league through high school. As a first baseman, left-handed batter and left-handed pitcher, he was a walk-on for Clemson University's Baseball Team in 1963. Of the 100 or so vying to make the team, Bud was one of just two to earn a spot. He was later declared ineligible to play. However, because he had attended Ole Miss his freshman year and there was a restriction on transfer players, though heartbroken, he was always proud to have been offered a position on a Division 1 baseball team. He graduated from Ole Miss in 1965, a member of Sigma Alpha Epsilon Fraternity. Bud left Mississippi after graduating from Ole Miss and marrying a beauty from Milwaukee. Dolores Haig, the mother of Raquel and Lesley Artyn. He spent his adult life in Milwaukee, Cincinnati, and Minneapolis. He was the owner of Network Medical Sales, and was a manufacture's representative selling medical supplies across the country. In 1993, Bud married Christy Case from McComb, MS. Soon after, they moved back to their home state and lived in Oxford and McComb. They were married 28 years and were the loves of each other's lives. His hobbies were vast and varied! In 1966, Bud obtained his private pilot's certification and began a long career of flying. He flew his beloved Mooney M20e for ten years. Logging 2,700 Hours to 246 different cities, with 2,080 take-offs and landings. He was passionate about flying. Quick to remind loved ones on a gloomy day that "The sun is always shining above the clouds." In December 1997 he had a crash-landing in Mooney at night in Statesville, North Carolina. He was told the story and his testimony hundreds of times, describing the Lord's presence with him that night as he survived catastrophic engine failure. His next airplane was a J-Model V-Tail Bonanza which he flew until retiring from aviation. Always an adventure-seeker, Bud loved motorcycles, once completing a 6,000 mile trip across 16 states in 16 days. He also loved boating on Lake Minnetonka in Minneapolis and the Tickfaw River in Louisiana. After retiring from his medical sales career, he transformed a 100- year- old grocery store in McComb, Mississippi, into a popular bar & grill named Buddy's - specializing in Mississippi Delta Hot Tamales. In 2007, He and Christy moved to Mountain Home, Arkansas, where Bud dedicated himself to rescuing and caring for animals. His brother-in-law, Joe Seawright, teased that he ran the "canine soup kitchen of the Ozarks" taking in every stray that ever crossed his path. He was a member of First United Methodist Church of Mountain Home. He enjoyed writing and created the blog "Falling Stars: Celebrity Aviation Disasters" (Https://BUDKEIRN.wordpress.com/) where he related his personal flying experiences to stories surrounding the air tragedies of: Payne Stewart, Buddy Holly, John F. Kennedy Jr., and others. Bud is survived by his wife, Christy Case Keirn, and his two daughters Lesley Artyn Keirn Nolan (Glen) and Raquel Keirn Diedrich (John). He is the grandfather to Lindsey Burke Tees, William Keirn Burke, Robert Claud Diedrich, and Daniel Diedrich. He has one great-granddaughter Penelope Joy Tees. His sisters, Margaret Lillian Spurgeon and Rebecca Keirn Seawright, live in Greenwood, Mississippi. Nieces and nephews include: Keirn Seawright Wilson - Lillie Belle and Jack Wade Joseph Power Seawright Jr. (Courtney) - Annabel, Mary Sutton and Power III. Rebecca Durden Seawright Bishop (Matt) - Bo, Ann Wallace, Walter and Arrabella.

Bud Keirn went peacefully from his home in Mountain Home, Arkansas, to be with the Lord on August 10th with his daughters, Raquel and Lesley Artyn, wife Christy, and sister Rebecca at his side. He was 78. Bud was born in Greenwood, Mississippi... View Obituary & Service Information

The family of Claud "Bud" Keirn III created this Life Tributes page to make it easy to share your memories.

Send flowers to the Keirn family.