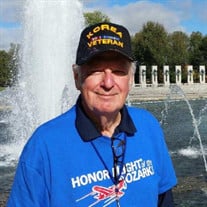 Clark Webster of Mountain Home, Arkansas, passed away December 10, 2021, in Mountain Home, Arkansas at the age of 90. He was born June 19, 1931, in Detroit, Michigan, the son of Clark Edgar and Laura Webster. When he was 17 years old, he met his future wife at the YMCA Boy/Girl Friday Night Dance. After he graduated from high school, he was drafted into the Korean War, but before he shipped out, he married Ellen Grace Hammond on July 5, 1952, in Detroit, Michigan. After returning home, he was able to receive a degree in industrial engineering and was a charter member of the Masonic Teplars in Alabama. He worked for Chrysler to develop Red Stone and Jupiter missiles, then later for Eaton Corporation to develop the first airbags for automobiles. Clark's first introduction to golf, was as a caddy. He and his brother carried for two years. He and Ellen enjoyed golfing; being outside, boating on the lake, getting exercise together. He had two "hole in ones" in Hot Springs, Arkansas. Clark and Ellen lived in multiple states, Michigan, Alabama, Florida, Missouri, Ohio, Arkansas enjoying activities everywhere. In 2007, they moved from Hot Springs to Mountain Home. He was a greeter at Wal-Mart for several years. Clark was an active member of the Korean War Veterans, raising money to help high school bands, Kindness Inc., several area food banks and other organizations in the community. After Ellen passed away in 2012, Clark adjusted by golfing and volunteering with Kindness Inc. In 2017, his daughters surprised him with an Honor Flight from Springfield, MO to Washington, D.C., where he was able to fly over the White House and visit several war memorials including Arlington National Cemetery. Clark is survived by his two daughters, Karen (Jeff) Schaeffer, Centennial, CO, Gail May, Norfork, Arkansas; four grandchildren, Matthew (Courtney) Lester, Stacie (Anthony) Tackitt, Raymond, (MacKenzie) Schaeffer, Sarah Schaeffer; and five great-grandchildren. Madison Lester, Brodie Lester, Chloe Lester, Cadence Tackitt & Maci Tackitt. He was preceded in death by his parents, Clark & Laura; brother Glenn Webster; wife Ellen; and infant son, Clark Edwin Graveside Services will be 11:00 am, Tuesday, December 28, 2021, at Kirby's Tucker Memorial Cemetery, Mountain Home, Arkansas, with Reverend Randy Ludwig officiating. Military Honors will be provided by the Alley-White American Legion Post #52 and United States Army Honor Guards. Memorials may be made to Kindness, Inc. of Mountain Home or Hospice of the Ozarks. Arrangements are by Kirby and Family Funeral and Cremation Services - Mountain Home, Arkansas.

The family of Clark Algot Webster created this Life Tributes page to make it easy to share your memories.

Send flowers to the Webster family.