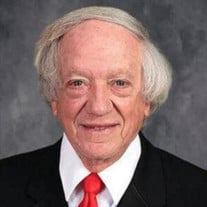 Bobby Dalton Hulse of Norfork, Arkansas, passed away January 27, 2021, in Mountain Home, Arkansas at the age of 76. He was born May 25, 1944, in Pine Bluff, Arkansas, the son of Benny and Cecil. He married Vicky Kay Mann on December 11, 1970 in Warren, Arkansas and worked as an educator for 55 years. Bobby lived in Norfork since moving from Hermitage, in 1980. He was a member and Deacon at Norfork Baptist Church since August 1980. Bobby started his teaching/coaching career following his graduation from Henderson State University as a junior high girls basketball coach and history teacher in Hermitage in 1966. There, he coached and met his wife of 50 years, Vicky Kay Mann, which he considered his life's greatest accomplishment. He and Vicky became parents to Tasha Nicole and Lance Dion in Hermitage, where they built their first home. In 1980, Bobby took a Principal job in Norfork, Arkansas, where he has served many positions within the school and state educational system. He served as Elementary Principal, High School Principal, Coach, Athletic Director, and was considered a mentor, father/grandfather to a countless number of generations from Norfork. We were happy to lend our Bobby D to a community that meant so much to him. Bobby D, a Dodger fanatic, would also be considered Norfork Panthers biggest fan. It didn't matter what sport or how far he had to drive, he was there. He enjoyed watching all sports. He loved music of all kinds as well as entertaining his students and faculty at all school events. He had a green thumb like no other. When he wasn't at a Norfork sporting event or working in his garden, he loved to support his grandkids in whatever activity they were involved. Bobby is survived by his wife of 50 years, Vicky Hulse of Norfork, AR, daughter, Tasha Harris of Mountain Home, and son, Lance (Shammi) Hulse of Bee Branch; Grandchildren, Satch Harris, Dodge Harris and McGee Harris of Mountain Home; Riley Roberson, Emiley Roberson, Isaac Hulse, Haze Hulse, and Haddi Hulse of Bee Branch; Siblings, Vernon Hulse of Fordyce, Shirley Brooks of Watson Chapel, and Billy Joe (Helen) Hulse of White Hall; and a host of nieces and nephews. He was preceded in death by his parents, Benny and Cecil Hulse, Siblings, JD Hulse, Gene Hulse, Doris Smith, Margie Fikes, Edna Gunther and Don Hulse. A Funeral Service for Bobby will be 2:00 pm, Sunday, January 31, 2021, at the Bobby D. Hulse Gymnasium at Norfork High School, with Shannon Byrd officiating. Burial will be in the Galatia Cemetery, Norfork, AR, with Brother Tom Stover officiating. Pallbearers will be Riley Roberson, Satch Harris, Isaac Hulse, Dodge Harris, McGee Harris, Haze Hulse, and Haddi Hulse. Honorary pallbearers will be Steve Lynch, Kevin Bodenhammer, Jerry Skidmore, Michael Zick, Darin Hughes, Melvin Small, and Rocky Dodson. Due to current restrictions, masks are required. Memorials may be made to the Bobby D. Hulse Memorial Scholarship, which has been set up at Anstaff Bank, 23 Wolf St, Norfork, AR 72658 and Farmers and Merchants Bank, 502 South Hickory, Mountain Home, AR 72653. Arrangements are by Kirby and Family Funeral and Cremation Services - Mountain Home, Arkansas.

Send flowers to the Hulse family.