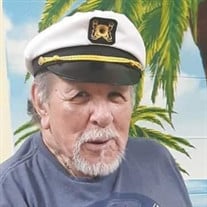 Antonio Sanchez, II of Calico Rock, Arkansas, passed away January 13, 2021, in Mountain Home, Arkansas at the age of 81. He was born February 1, 1939, in Clarkdale, Arizona, the son of Antonio and Ruth Azpeitia Sanchez. He was a wire-line specialist... View Obituary & Service Information

The family of Antonio N Sanchez created this Life Tributes page to make it easy to share your memories.

Send flowers to the Sanchez family.